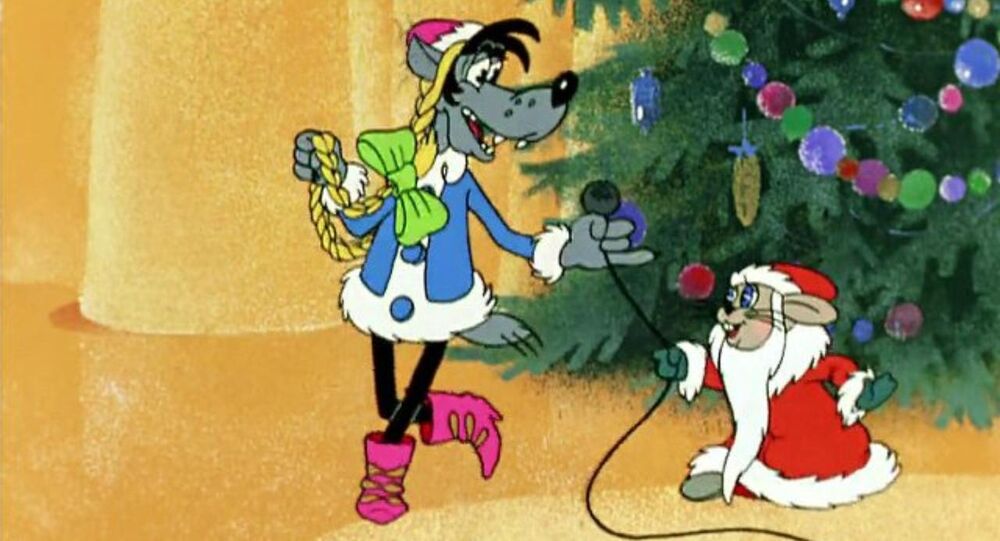 During the holiday season, many people enjoy returning to music from the holiday films and cartoons of their childhood. Americans have holiday classics featuring Charlie Brown, Frosty and the Muppets. But what about Russians? What are the Russian equivalents to these nostalgia-inducing works of art? Sputnik did a bit of digging to find out.

In Russia, the December 31 New Year's holiday is something like American and European Christmas plus New Year's all rolled into one. While Christmas is still celebrated according to the Julian Calendar on January 7, the Christmas-like atmosphere of gifts, evergreens covered in decorations, resolutions and the general overall sense of holiday cheer is concentrated in New Year's.

© REUTERS / Ints Kalnins
The New Year is Here! Christmas Trees Around the World
24
With this in mind, there are a few tunes from New Year's movies and cartoons, most of them around since the Soviet period, which when heard, automatically activate a nostalgia nerve among most Russians born in the 20th century. Here are a few of the best.

'Nu, pogodi!' or 'Well, Just You Wait!', the extremely popular Soviet and Russian animated series which has also gained popularity outside the former USSR with the advent of the internet, features one of the most beloved New Year's songs of all time.

In series 8, circumstances force Wolf, on his traditional quest to catch and eat Hare, to show off his singing skills, all while wearing a ridiculous outfit and braid. Hare, dressed as Father Frost, is joined on stage by Wolf dressed as Snow Maiden, the mythological holiday figure's traditional helper. With Father Frost asking Snow Maiden what 'she's' been up to, Wolf replies that Snow Maiden has been busy running after Father Frost, and that he would be her singular wish and New Year's present.

Irony of Fate — 'The Last Waltz'

Just like Americans have Frank Capra's 1946 classic It's a Wonderful Life, which has seemingly played on a loop on Christmas eve over the course of decades, Russians have their own holiday classic that's a must-watch every New Year's: 1976's The Irony of Fate, or Enjoy Your Bath!, a romantic comedy directed by Eldar Ryazanov. The holiday staple features a theme by Mikael Tariverdiev which has probably been engrained in the minds of every Russian born before the year 2000.

The song also inspired an acoustic version, complete with endearing and humorous lyrics, called 'If You Don't Have an Aunt'.

'If There Was No Winter', 'Song About Summer', 'Beacon Tree', 'What is This Miracle Wonder'

Aside from Well, Just You Wait, an array of other classic cartoons have featured New Year's themes, including the Prostokvashino series' 'If There Was No Winter', Father Frost, Summer's 'Song About Summer' and Umka's Search for a Friend's 'What is This Miracle Wonder'.

© Sputnik
Happy New Year!
Incidentally, after the end of the Soviet period, as Russians became more acquainted with Hollywood movies, many have added classic American holiday songs to their holiday libraries. These include Bing Crosby's 'White Christmas', from the 1942 film Holiday Inn, Judy Garland's 'Have Yourself a Merry Little Christmas', from the 1944 film Meet Me in St. Louis, and even It's a Wonderful Life's 'Auld Lang Syne.'

Famous Soviet Russian baritone Eduard Khil, immortalized on the internets as Mr. Trololo, has his own popular holiday song entitled 'Winter'. While not specifically focused on New Year's, the song has become widely associated with the holiday, and even featured in a 1982 special devoted to the poetry and music of Sergei Ostrovoy.

Moscow Turns Into a Huge Theatre on New Year’s Eve

The New Year is Here! Christmas Trees Around the World