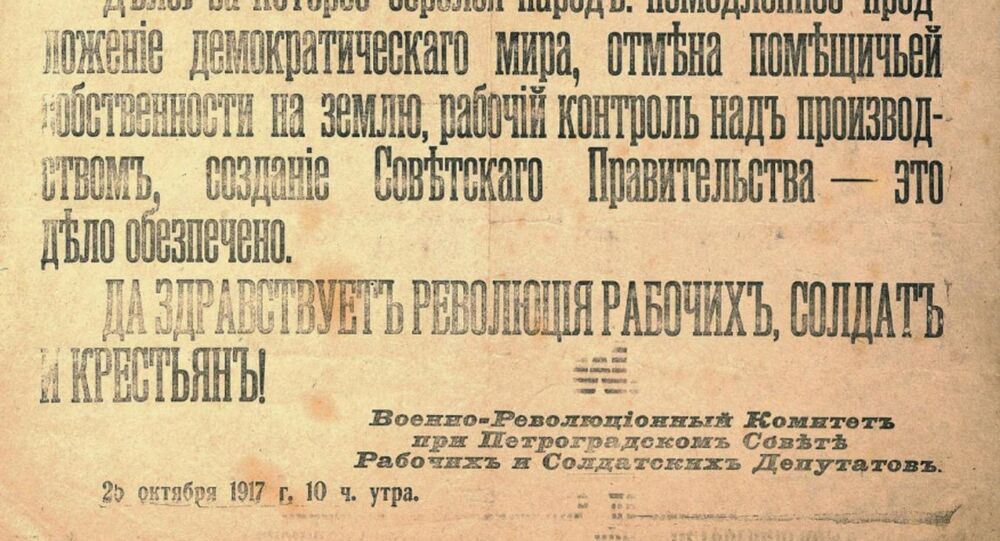 As part of a visual arts exhibition at the Tate Modern museum in London, an extremely rare November 1917 poster proclaiming the birth of the Soviet Union will be displayed beginning November 8.

The poster, said to have been dictated by Vladimir Lenin announcing the overthrow of the post-monarchy interim Russian government, is thought to be one of only a few hundred that were printed and pasted on the public walls of what is now Saint Petersburg on November 7, 1917.

Claimed by the museum to be one of the most historically-significant documents of the 20th century, the poster will be displayed in Britain for the first time, according to the Independent.

The poster was acquired by the Tate in 2016, and is part of a larger exhibition called "Red Star over Russia."

Subtitled "a Revolution in Visual Culture, 1905-1955," the London exhibition is set to coincide with the hundred-year anniversary of the so-called October Revolution in Russia.

The poster, begins with the line: "To the citizens of Russia" and reports that "the provisional government has been deposed."

Documenting that "state power has passed into the hands of the organ of the Petrograd Soviet of Workers' and Soldiers' Deputies — the Revolutionary Military Committee, which heads the Petrograd proletariat and the garrison" the poster announces that "the cause for which the people have fought — namely, the immediate offer of a democratic peace, the abolition of landed proprietorship, workers' control over production, and the establishment of Soviet power — has been secured."

In what were certainly fateful and iconic words, the document concludes with: "Long live the revolution of workers, soldiers and peasants!"