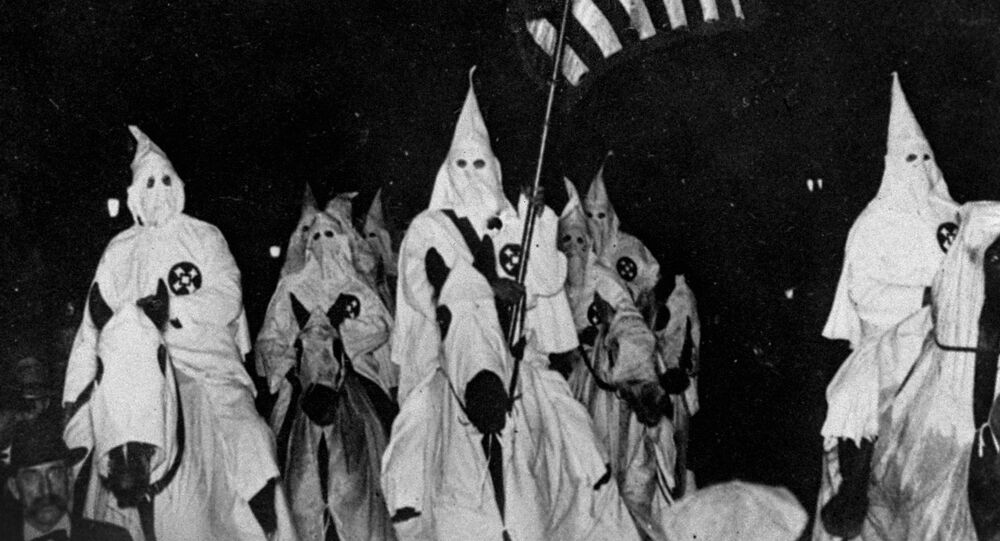 The students in the photos being circulated, which include the caption "Happy Halloween F*ckers," are believed to be from Hickory High in Chesapeake, Virginia. They would seem to be wearing Halloween costumes.

The school district says it is taking "appropriate action," but has not specifically commented on the disciplinary actions the students may face.

The photos were shared on Facebook by Emily Byers, a Chesapeake, Virginia local, with the caption: "Dear Chesapeake, VA: teach your sons that dressing up as a KKK member & hanging out in the Food Lion parking lot is disgusting & unacceptable."

Bayers' post was reshared on Facebook over 600 times, with many of the comments urging people to contact the city's mayor, crime line and public school system.

"I have called the mayor, left a tip on the Chesapeake crime line, and WAVY TV 10 and contacted the Chesapeake school system and the principal of this school. I suggest you do the same. We should not tolerate hate in our communities, everything starts here," one commenter wrote.

Another comment reads: "I just talked to the school and they told me more than a few people have called and the administration is dealing with i as we speak and Hickory High School is not tolerating this at all… i'll be damned if my family who still goes there deals with this sh*t especially at my alma mater."

"It's gonna be offensive to some people, as it should be. I wouldn't want my kid to do that. I don't think they should face any consequences; however, I think it was done in very poor taste," community member Wendy Gonzalez told local Virginia station WVEC-TV.

"I think in this day and age, people don't think of the consequences for their actions or how that might impact others around them or how others might interpret their actions," Cedric West said.

A Virginia boy caused an internet uproar in 2013 when he wore a KKK costume for trick-or-treating; his mother, Jessica Black, was roundly criticized for allowing him to wear the offensive costumes. Offensive Halloween costumes are a perrenial issue in the US — and as the US Immigration and Customs Enforcement Agency ramps up work detaining and deporting undocumented immigrants, Amazon's "Sexy Border Patrol" costume is raising eyebrows.

Just last month, five Creston Community High School students in Iowa were disciplined for uploading a picture of themselves in Ku Klux Klux hoods burning a cross. One of the men in the photo is holding a rifle while another is holding a Confederate flag.

The students were allegedly disciplined by the school although it is not clear how.