Complaining about her unsatisfying work life, Joanne Wickenden, a British Airways flight attendant, was fired Tuesday after she posted a racist rant against Nigerian passengers on Snapchat.

According to reports, Wickenden was flying from London's Heathrow airport to Abuja, Nigeria, Friday night when she got the urge to file a complaint to her followers on social media.

​"I'm here, getting ready to go to work, put on a yellow lifejacket, and point out the exits and hand out chicken or beef. What sort of night is this for me?" the stewardess complained. "The upside is that I'm going to Nigeria tonight and there's going to be bare BBC."

Though Wickenden quickly laughed it off, adding that she's "only joking," her rant didn't end there.

"All the Nigerians are all gonna be there asking for f*cking upgrades because they haven't got enough leg room because their BBCs are in their way," Wickenden said. "Big d*cks like this swinging from side to side." 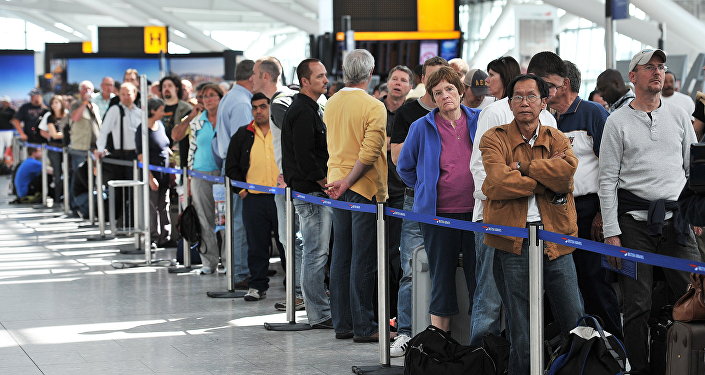 © AFP 2019 / CARL DE SOUZA
British Airways Mixed Fleet Crew to Strike for 2 More Weeks in August
For added effects, the "I can't cope with this flight" attendant gesticulated the second half of her comments with her hand.

Concerned, a fellow British Airways employee informed the higher-ups about the aspiring actress' post, which triggered an investigation.

"We expect the utmost professionalism from our staff when they are representing British Airways," the airline said in a statement. "We are investigating this video."

Though the hostess was fired following a two-hour meeting with management, she later told MailOnline that she wasn't a racist and that the post was all a setup to get her kicked off the crew.

"I have been framed by another [British Airways] employee," the 23-year-old said. "They were encouraging me, egging me on to say things. They were recording me and sent it around to our friends."

Since going viral the video has received mixed responses from netizens.

​The unemployed Britain added she now no longer "want[s] to fly anymore."