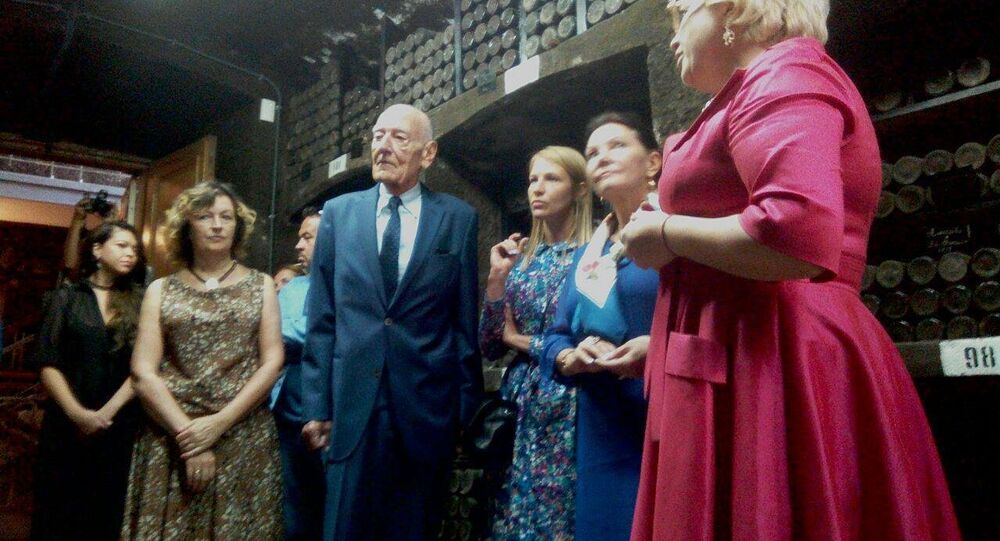 Amid the Russia-EU sanctions standoff, Count Jan Bernadotte of the Swedish Royal House shocked his nation with a visit to Crimea, during which he voiced plans to produce elite wines on the Russian peninsula, which is renowned for its vineyards.

Last week, 76-year-old Count Jan Bernadotte, who is the second cousin to Carl XVI Gustaf of Sweden and a renowned viticulturist, visited the Russian city of Yalta to familiarize himself with Crimea's famous wine producer Massandra. By his own admission, Bernadotte was pondering a possible joint project with the Russian state-owned wine producer in order to help it establish itself in the European market.

Bernadotte was welcomed with a red carpet and was personally guided around the facilities by Massandra director general Yanina Pavlenko. During the guided tour, the two visited Massandra's wine cellars and tasted their wines.

"The Count acknowledged that he did initially not believe that the classic Massandra wine would be to his taste, but turned out to be surprised. 'This is totally my kind of wine,' he said afterwards," Yanina Pavlenko wrote on Facebook.

"I'm amazed that many wives can survive people, events and cataclysms and remain beautiful," Gunilla Stenfors told the Russian newspaper Komsomolskaya Pravda, admitting that the first sparkling wine she had tried in her life was Russian.

Perhaps unsurprisingly, Bernadotte's visit to Crimea and cooperation plans triggered strong reactions in Sweden. Following Crimea's re-unification with Russia, which Sweden has been portraying as an "annexation" on Russia's part, the EU introduced sanctions, which specifically include a ban on goods originating from the peninsula. It is also forbidden for EU citizens to invest in Crimea.

Kjell Engelbrekt, a professor of political science at the Swedish National Defense College, argued that these plans were "not a testimony of good judgment," adding that member of the Swedish Royal Family may end up being exploited for propaganda purposes.

"True, there is a lot of money to be earned here. But as a Swedish citizen, one has to comply with laws and regulations," Kjell Engelbrekt told the Swedish daily Dagens Nyheter, pointing out possible legal consequences.

Decisions regarding Massandra's international cooperation can be only taken after the Russian state formally approves, Pavlenko stressed.

Count Jan Bernadotte (formally Carl-Johan Gustaf Wilhelm Bernadotte) is the great-grandson of King Gustaf V of Sweden and is renowned as a wine grower. His somewhat strained relations with the Swedish court were addressed in a 2006 memoir titled "Jan Bernadotte — The Black Sheep of the Court."

Found in 1894 by Prince Lev Golitsyn, Masandra is acknowledged for its viniculture and production of dessert and fortified wines. The winery's repository contains about one million bottles of wine. Massandra received a lot of international attention when Russian President and former Italian Prime Minister Silvio Berlusconi visited its wine cellar and shared a 240-year-old bottle of red wine in 2015.