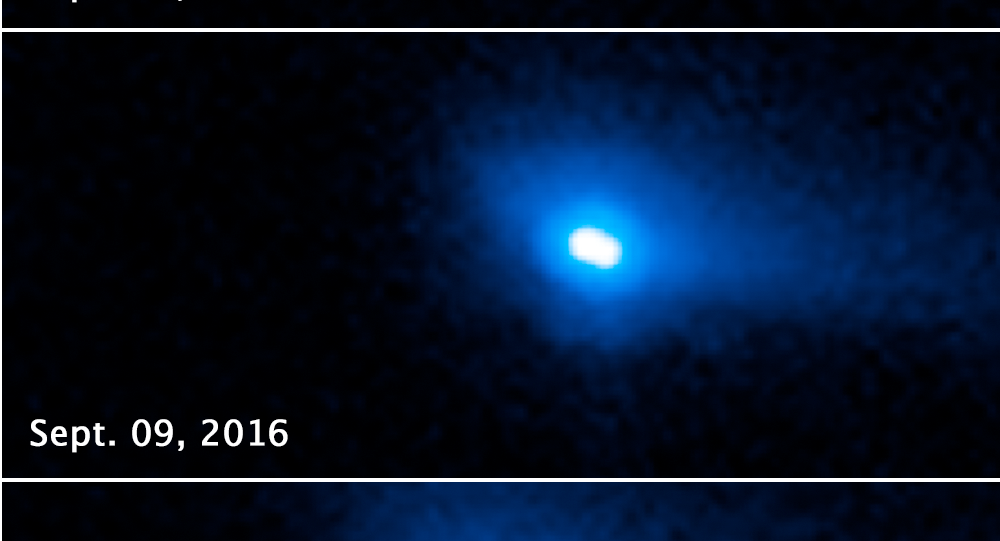 Scientists discovered a unique binary asteroid that behaves like a comet, which was tracked with the help of the Hubble Space Telescope. The discovery is expected to allow astronomers to learn more about the evolution of the Solar System.

Designated 288P, the object was detected in the asteroid belt between Mars and Jupiter.

Nature, an international weekly journal of science, described it as a binary main-belt comet, which is "part of a young family of at least 11 asteroids that formed from a precursor about 10 kilometers in diameter during a shattering collision 7.5 million years ago."

Studying Hubble images, scientists concluded that 288P includes two asteroids of roughly the same size and mass, orbiting each other at a distance of about 62 miles (approximately 100 kilometers) and spewing water vapor and dust into space.

It makes 288P the first ever known binary asteroid that can also be classified as a main-belt comet, according to researchers.

"We detected strong indications for the sublimation of water ice due to the increased solar heating – similar to how the tail of a comet is created," team leader Jessica Agarwal was quoted by the space.com website.

© CC0 / UKT2
Not One, But Three? Giant Flyby Asteroid Had Company When Passing Earth
She added that "the uniqueness of 288P is the combination [of factors]," and that the combination of orbital characteristics related to 288P is "different from all other known [asteroid] binaries."

First tracked back in 2006, the binary asteroid was re-examined in September 2016, when Hubble took a spate of images before it made its closest approach to the sun.

Agarwal also said that dealing with processes pertaining to the evolution of asteroids, scientists could get more information on how planets of the Solar System were formed.