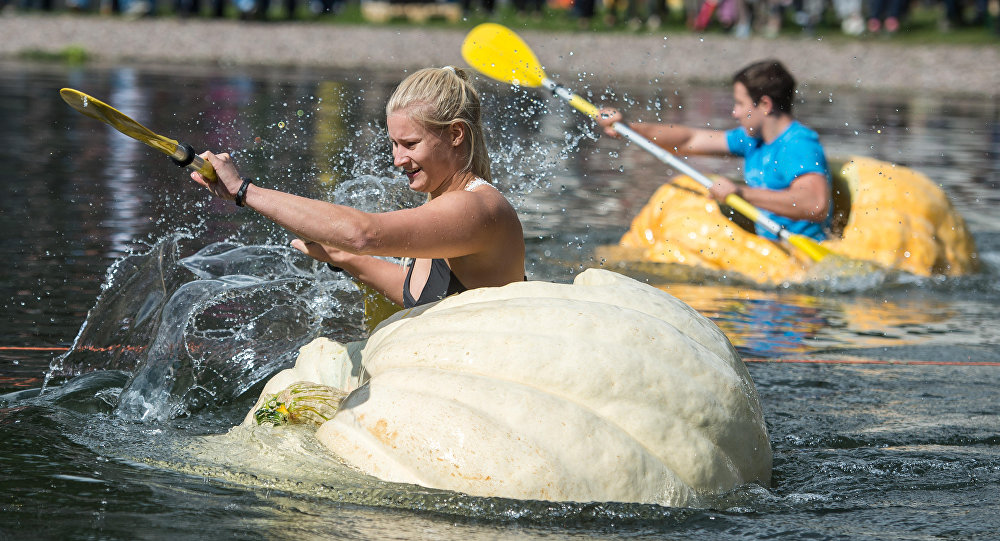 Pumpkin Regatta! Dozens of Enthusiasts Race in Real Vegetables Instead of Canoes

Daring canoeists gathered in Ludwigsburg, Germany, to plunge their hollowed-out pumpkins into the water and race across the lake at record speeds during the annual Pumpkin Paddling Championship held on September 16-17.

While Munich beer-lovers celebrate their Oktoberfest extravaganza, people in the German city of Ludwigsburg are having fun their own way. During the weekend of September 16-17, dozens of enthusiastic canoeists competed in a very odd boat race, organized as part of the traditional Ludwigsburg Pumpkin Festival, which is held from September 1 to November 5, 2017.

Instead of traditional boats, the participants of the unusual regatta used gigantic hollowed-out pumpkins, some of which could easily fit several full-grown adults.

Aboard their 100% organic craft, prodigious pumpkin paddlers raced on Castle Lake. For those who didn't manage to grow their own giant gourd, the contest organizers provided pumpkin boats and paddles.

This year, the German Pumpkin Paddling Championship was held for the 14th time. Traditionally, this regatta was held on Sunday, but with the increasing popularity of pumpkin paddling, this year's competition was held on Saturday as well.

Qualifying rounds were held on Saturday for the Sunday finals. The sixteen fastest canoeists (eight women and eight men) from the qualifying rounds made it to the finals and got the chance to compete for the main prize of 200 Euros.

In addition to Pumpkin Boat Racing, Ludwigsburg's fall festival includes other special events, such as pumpkin-carving shows, giant pumpkin and squash showcases, German and European Championships in a Pumpkin Weigh Off, cooking Germany's biggest pot of pumpkin soup and other delicious dishes made from pumpkins, musical entertainment and various fun activities for kids.