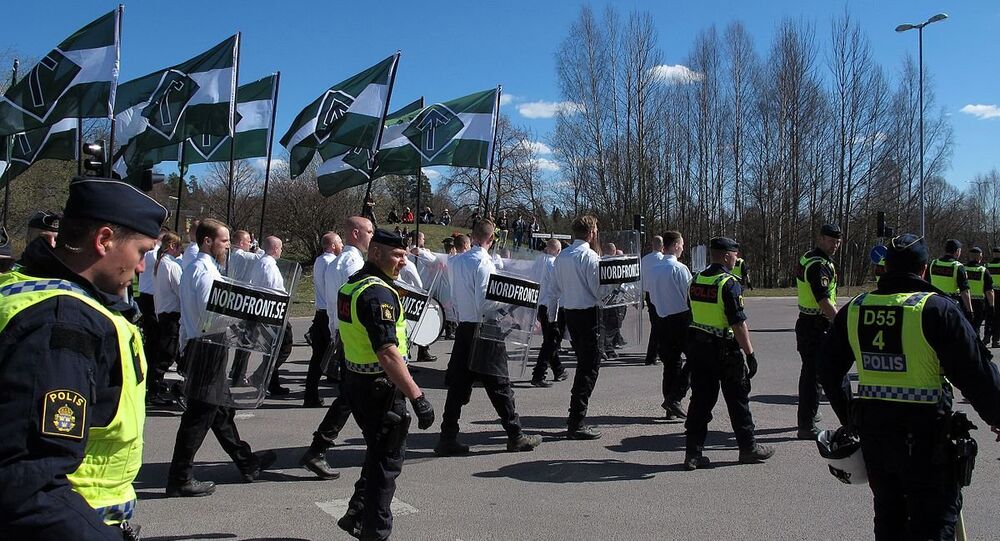 Sweden's main Jewish organization has appealed a police decision granting the far-right Nordic Resistance Movement (NRM), which is perceived as neo-Nazi and openly racist, permission to stage a march near a synagogue in Gothenburg in late September.

Sweden's Jewish diaspora has found it particularly unappealing that the alleged "Nazi" march falls on the same day as the holy Jewish holiday Yom Kippur, which is observed by fasting and praying. Additionally, NRM members are also expected to pass dangerously close to the Gothenburg synagogue.

"It's the day of the year when many Jews who normally don't visit the synagogue will gather there. On this very day, the police have decided to grant the neo-Nazi Nordic Resistance Movement permission to march through Gothenburg, no more than a stone's throw away from the synagogue," Aron Verständig, chairman of The Official Council of Swedish Jewish Communities, and Allan Stutzinky, chairman of the Jewish Community in Gothenburg, wrote in a joint opinion piece in Svenska Dagbladet.

© AP Photo / Matt Rourke
Swedish Politician Slams Church for Islamization, Likens Quran to 'Mein Kampf'
Verständig and Stutzinky expressed fears over the Jewish community's security and argued that the upcoming march evokes uncomfortable associations for Jews, since many of the Holocaust atrocities in Nazi Germany were carried out specifically on the "most important days of the Jewish calendar."

However, the vociferous protests from the Jewish diaspora and leftist activists failed to persuade Swedish police to change their routines.

"According to the government, everyone has a right to demonstrate, and a Jewish feast is not reason enough to deny a demonstration permit," Erik Nord, chief of police in Greater Gothenburg told Swedish national broadcaster SVT, arguing that there was no provision for banning the demonstration. "We can only limit it once there is a real danger to order, safety or traffic," Erik Nord continued.

Lawyer Anne Ramberg, the secretary general of Sweden's Law Society, pointed out that it is next to impossible to provide adequate legislation that would allow the police to say no, while also safeguarding everyone's right.

"Even if you were to provide legislation that would somehow affect this, the risk of arbitrariness would be very great. What groups may possible be denied the right to demonstrate where they want? I strongly question the police's power to make such considerations," Anne Ramberg said, arguing that wrong decisions may have "devastating consequences."

© AFP 2021 / JONATHAN NACKSTRAND
Disgruntled Swedes Drift to the Right to Protest Migration
The NRM had initially sought permission to stage the march on one of the main avenues of Sweden's second-largest city, but were only granted a permit for agreeing to change the route. The new route will pass not far from the synagogue.

Several counterprotests are expected to be staged to demonstrate against the NRM, triggering anticipations of violent clashes with members of far-left groups.

The far-right Nordic Resistance Movement exists in Sweden, Finland, Norway and Denmark and works to promote a self-sufficient national-socialist Nordic state, which would unite the Nordic nations of the Scandinavian Peninsula. By its own admission, the NRM also seeks to prevent "miscegenation" (racially mixed couples), discourages "mass immigration of racial aliens" and strives to "regain power from the global Zionist elite."

Despite regularly holding marches across Scandinavia, the NRM remains a marginal phenomenon in Nordic politics and has been commonly stamped in Nordic press as "neo-Nazi" and having a white supremacist agenda. Sweden's anti-racism foundation Expo previously identified the NRM as the driving force behind a surge in neo-Nazi activity in Sweden, mostly through distribution of flyers and stickers. In 2016, the Finnish police sought to ban the NRM as "violent and openly racist."

At present, Sweden's Jewish diaspora is estimated at about 20,000 people. Several waves of Jewish immigration to Sweden before and during World War II also led to the recognition of Yiddish as a minority language of Sweden.

© AP Photo / Johan Nilsson / TT
Takes All Kinds! Norwegian Airline in Hot Water for Blond-Only Ad
In recent years, though, a rise of anti-Semitic sentiments has been reported across Sweden, which is mostly attributed to the growing Muslim immigrant population. Additionally, Stockholm's diplomatic relations with Israel deteriorated after Sweden became the first member of the EU to recognize the State of Palestine in 2014.

Earlier this year, the Jewish Association in Umeå, northern Sweden, has decided to terminate its activities and close its premises following Nazi threats. The association members reportedly felt unsafe after its spokesperson received unwanted visits to her home, Swedish Radio reported.