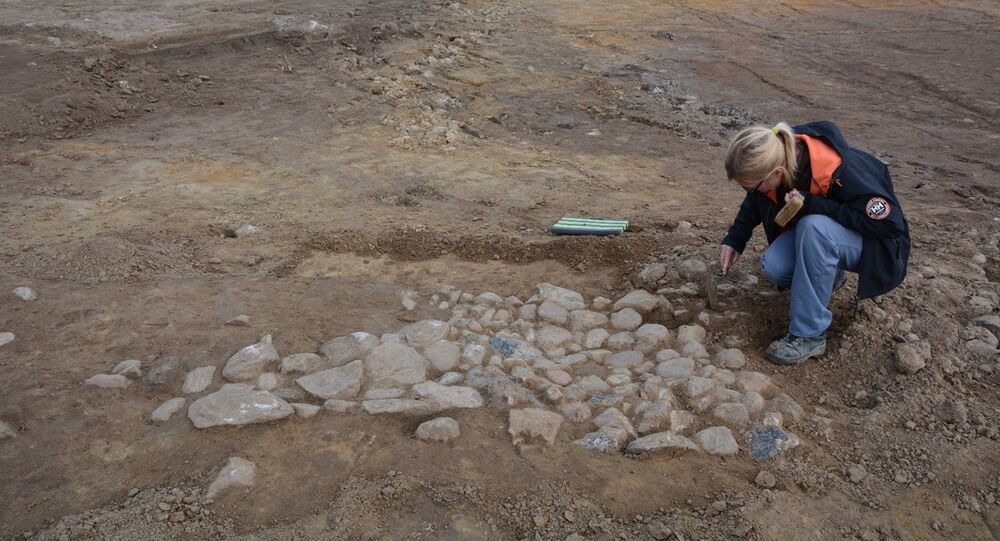 Danish archeologists have sensationally discovered the remains of an historic hamlet from the Middle Ages that disappeared from the country's map centuries ago.

In connection with the construction of a new residential area, Danish archeologists from the Moesgaard Museum have stumbled upon the remnants of an historic village that vanished from the face of Jutland. The remains of a stone-paved road and three modest homes, typical of the Middle Ages, were uncovered through the discovery of their post holes in the ground.

Records about Hovedstrup from Odder in East Jutland today date back as far as the year 1200, but the village is speculated to be possibly even older.

"We have found traces of three plots of lands with poles dug into the ground," excavation leader Mogens Høegsberg from the Moesgaard Museum explained to Danish Radio. Two of them date back from around 1600, while the third can be traced back to the 1200s and maybe even longer. "As is often the case with archeology, we can never draw a red line and say for sure, but we still believe that there is good evidence," Høegsberg added.

© Photo : Pixabay
The Grapes of Wrath: Danish Scientists Discover Secret Saga of Viking Vineyards
The method of building homes using poles is known from as early as the Stone Age, but continued slowly into the early and late Middle Ages, where half-timbered houses on a rock foundation were built.

"The Hovedstrup houses themselves will probably never be found, because they were likely to have been ploughed into pieces in recent times," Mogens Høegsberg pointed out.

Throughout its history, the land has changed hands numerous times, from private farmland (until 1481) to the crown's possession and back into private ownership in subsequent centuries.

After the excruciating loss of the province of Skåne to Sweden in 1660, the steward of the realm Joachim Gersdorff Åkær received Hovedstrup as a replacement for his lost possessions in Skåne (today Sweden's southernmost province). His daughter Sophie Amalie, who was married to Admiral Jens Rodsteen of the famous Rodsteen dynasty, which produced a number of military leaders, statesmen and naval commanders, inherited the estate in 1661, whereupon its was renamed to Rodsteenseje.

The intentional abandonment of the village in the late 1600s wasn't uncommon for the time, as wealthy landlords would often rearrange their land to accommodate new farmland or hunting grounds. Since 1682 the village has been regarded as being abandoned.

© AP Photo / Mads Nissen / Polfoto
The Real Techno-Vikings: Thousand-Year-Old Fort Discovered in Denmark
The uncovered road, however, probably came much later after the village was abandoned.

Meanwhile, the excavations continue, which is why both archeologists and excited locals anticipate further discoveries.

The Moesgaard Museum (MOMU) is one of Denmark's largest dedicated to archaeology and ethnography. It is located in a suburb of Aarhus, which is the 2017 European capital of culture.

"The @MuseumMoesgaard brings the past to life in the most striking architectural setting" — @standardnews #Denmark pic.twitter.com/wXMuzMPDpa