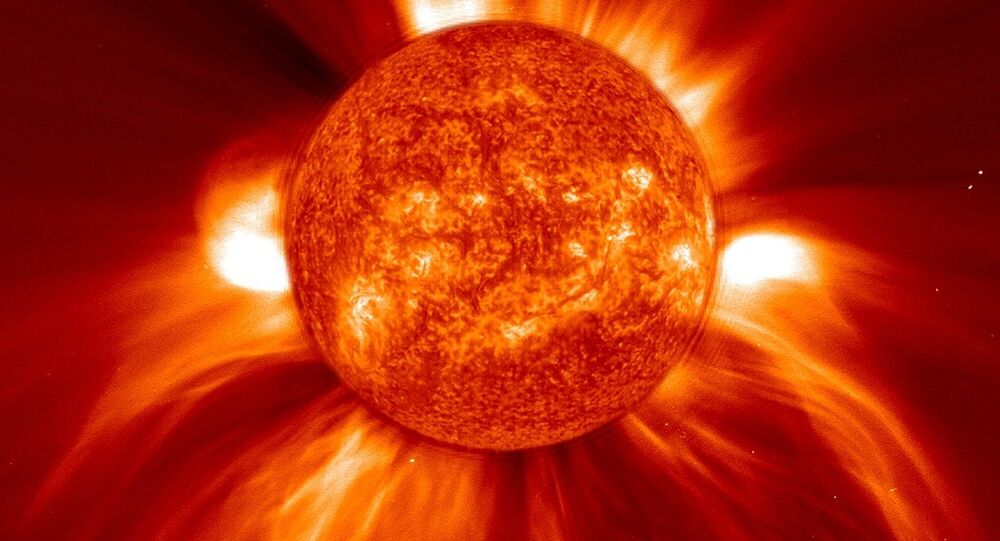 While scientists are ringing alarm bells amid six recent solar flashes, including the biggest one in 12 years, it is just the easy bit if compared to a mechanic contact between the star and the Earth. Here are four scenarios of a really scorching apocalypse.

Actually, the question is much more complicated than it seems at first glance, according to the Popular Mechanics magazine's Russian version.

"In short, humanity will in any case cease to exist because scientists have yet to create systems and programs that could protect us even from a small fraction of the fury of the 'solar deity'," Popular Mechanics said.

It added that everything will depend on which part of the Sun may theoretically drop on Earth, something that may change the scenario of the global destruction.

The chromosphere is the outer shell of the Sun, the thickness of which stands at about 2,000 kilometers. Its upper limit, unlike mass media reports, does not have a clearly-cut smooth boundary: the star is dotted with thin needles of hot discharges, the so-called spicules.

© Photo : R.J. Hall
Evil Twin? Sun Formed Alongside Second Star That Could Be Wreaking Havoc on Earth
The Sun simultaneously ejaculates up to 70,000 such spicules.  The higher the chromosphere, the hotter it becomes, with temperature reaching 19,500 degrees Celsius in the upper layers.

The density of the chromosphere is a million times smaller than the density of the Earth's atmosphere, and therefore the pressure on our planet will instantly destroy this fragment of the Sun.

However, it may lead to the emergence of vacuum which will fill the air, creating a shock wave capable of breaking a person to pieces.

It is the photosphere that forms the visible surface of the Sun. This is a very thin layer, with its thickness ranging from 100 to 400 kilometers, according to various estimates.

© Sputnik / Vladimir Pesnya
Blackout: Doctors Reveal How Solar Eclipse Affects People
The main part of the Sun's optical radiation emanates from its photosphere, which helps astronomers calculate the Sun's size, the distance between the Sun and various cosmic objects as well as other parameters.

It also has a much lower density as compared with that of Earth, but because of heating, a fragment of the photosphere does not collapse if it hits our planet. Instead, it will emit a short but incredibly intense light, something that we typically watch from a distance of about 148 million kilometers.

Of course, if you stand nearby, the photosphere will immediately burn you down. But as soon as a photosphere fragment cools down, it will instantly turn into a safe inert gas.

The outer shell of the Sun in fact consists of plasma prominences which eject particles of ionized plasma and energy flows millions of kilometers around.

If its sample hits the Earth in the same form as it is in the Sun, the pressure that keeps the plasma together will immediately disappear.

This will result in a powerful thermonuclear explosion, in which all living things will burn in a fiery hell, Popular Mechanics predicted.

A fragment of the solar core will certainly cause the deadliest impact on Earth given that the core's density is 6.6 times higher than that of osmium, the world's densest metal.

© CC0
Sun Sends Out Sixth Solar Flare in Less Than Week
The core's temperature reaches 14 million degrees Celsius. Its  permanent thermonuclear reaction is known as the "proton-proton" in which the helium-4 isotope is formed from four protons.

During the process, every second sees 4.26 tons of solid matter turning into radiation, something that Popular Mechanics said "is even hard to imagine."

In any case, a fragment of the solar core hitting Earth remains just a hypothetical scenario, Popular Mechanics concluded.