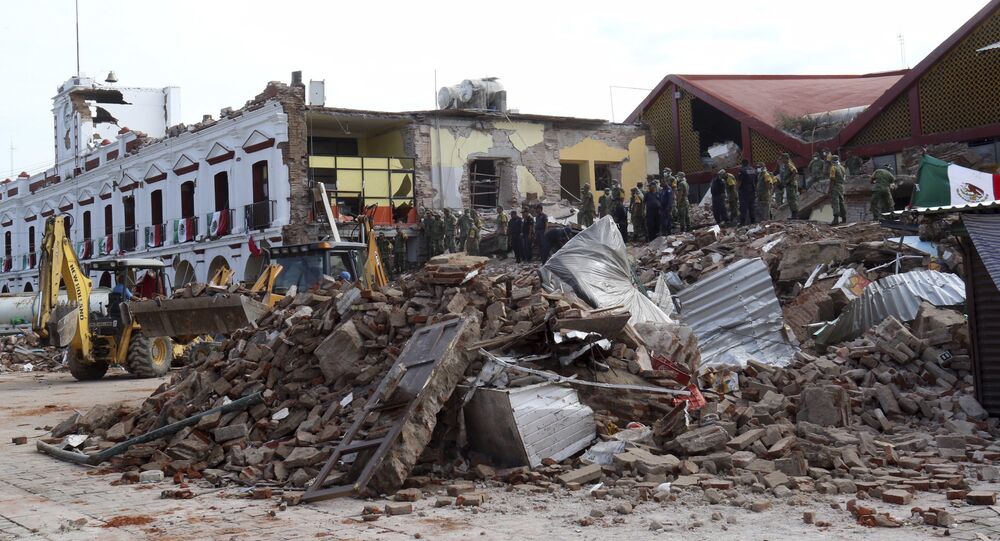 ‘As if it Had Been Bombed’: Mexico Earthquake Survivors Recount the Disaster

Just minutes after midnight Thursday, residents in Mexico's southern region were awoken by the shaking of an 8.1 earthquake that resulted in the deaths of at least 58 people.

While the tremblings could be felt as far north as Mexico City, the City of Palaces didn't face the full impact of the earthquake; that was left to the states of Chiapas and Oaxaca.

​Home to roughly 9 million people, both states saw massive destruction as buildings and local business were flattened — many with people still inside.

"There are houses that collapsed with people inside," Luis Felipe Puente, the head of national civil protection, told local station Milenio, indicating 45 died in Oaxaca, 10 in Chiapas, and three others in Tabasco.

​Among the dead was a child killed by a collapsed wall and a baby on a ventilator who died when the hospital lost power. In the immediate aftermath of the quake, 1.85 million people lost electricity; 1.38 million have since had their power restored, Mexico's President Enrique Peña Nieto said in a Friday press conference.

"It's truly a critical situation," Oscar Cruz Lopez, Mexico City's municipal secretary, said Friday. "The city… it's as if it had been bombed."

For many, the earthquake brought up memories of the last 8.1 that struck the country.

"The scariest part of it all is that if you are an adult, and you've lived in this city your adult life, you remember 1985 vividly," Alberto Briseño, a bar manager in Mexico City, said. "This felt as strong and as bad."

"Now we will do what us Mexicans do so well: take the bitter taste of this night and move on."

​Labeling the quake one of the largest in the past 100 years, the 51-year-old president said that since the main quake there had been at least 62 aftershocks felt by thousands.

"The house moved like chewing gum and the light and internet went out momentarily," Rodrigo Soberanes, a resident of Chiapas, told reporters on Friday.

​"The streets and buildings started swaying considerably," Harry Neville-Towle, a tourist in Mexico, told NBC News. "All the cars started pulling over and people started coming out of their houses… people were afraid to go back inside for at least an hour, as we were all unsure of whether there might be an aftershock."

Aftershocks weren't the only concern: the Mexican government also warned that the nation could see waves of up to 10 feet in certain parts. The Pacific Tsunami Warning Center said waves of 3.3 feet above the tide level were measured off Salina Cruz, a major seaport in the Oaxaca state.

With the epicenter situated some 100 miles from Chiapas, Susan Hough of the US Geological Survey wasn't surprised that it came from a "seismic hotspot" where one tectonic plate dives under another.

Though officials are still reviewing data, preliminary analysis shows the quake was set off by the "sudden bending or breaking of the Cocos plate."

"Off the west coast of Mexico is what's called a subduction zone, the Pacific Plate is moving under the Mexican peninsula," Lucy Jones, a USGS seismologist, told New Scientist. "It's a very flat fault, so it's a place that has big earthquakes relatively often because of that."

​Though the USGS measured the quake at a magnitude of 8.1, the Mexican Seismological Agency rated it at 8.4.

The US' southern neighbor was already bracing for Hurricane Katia to strike Veracruz, not far from the earthquake-affected states, early Saturday. Officials say the storm could bring life-threatening floods.

No Tsunami Threat From Magnitude 7 Earthquake Off Mexico Coast