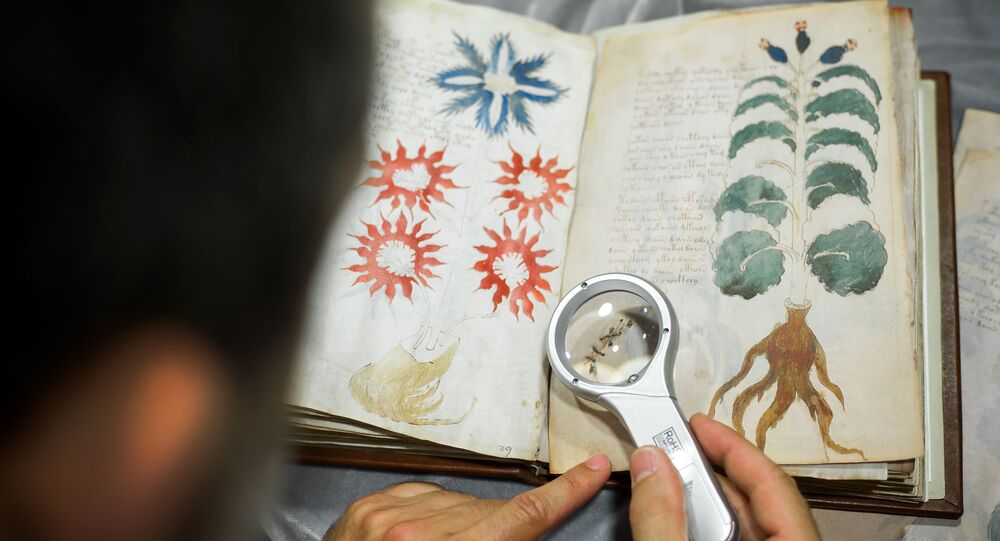 Ever since 1912, researchers have attempted to unravel the mystery of the Voynich manuscript, a six-centuries-old document that some believe has magical powers - but now, an expert on medieval manuscripts believes he's found the answer.

For over a century, researchers have been trying to decipher the Voynich manuscript, a 600-year-old document often described as the world's most mysterious medieval text. Now, one British academic claims they have solved the riddle — the peculiar document is in fact a mere health manual for "well-to-do" women wishing to treat gynecological conditions, which identifies various herbal remedies.

​The manuscript is full of exotic illustrations of plants, stars, mysterious human figures and mythological animals, as well as many pages written in an unknown language, and has long-baffled scholars, cryptographers and codebreakers alike — several theories and interpretations have abounded over its meaning, although a conclusive interpretation has proven elusive.

Many will likely be disappointed at its mundane explanation.

Nicholas Gibbs, an expert on medieval medical manuscripts, reached his relatively humdrum resolution after discovering the text is written in Latin ligatures — text developed as a "shortcut" (much like journalist shorthand) in Roman times.

Ampersands (&) arise from Latin ligatures, as they are visual conglomerations of the letters "e" and "t" — "et," the Latin for "and."

Moreover, Gibbs has concluded Voynich was a "crooked book dealer" who deliberately encouraged the "crackpots and conspiracy theories" that have swirled around the text for over a century.

The book's intriguing mix of elegant writing and drawings of strange plants and naked women has some believing it holds magical powers.

Gibbs stated that by studying medieval Latin, it became obvious each character in the Voynich manuscript represented an abbreviated word, not a letter — and when translated, the text outlines standard medical information.

He believes the accompanying images of nude women and healing plants also suggested the text referred to aromatherapy, practised by Greek healer Hippocrates and Roman naturalist Pliny the Elder — and the illustrations of plant remedies, Zodiac charts and instructions on thermal baths indicate whoever wrote the document had a good understanding of medieval medicine.

Baths in particular were a healing remedy practised by Greeks and Romans and throughout the Middle Ages — curing gynecological complaints and other female diseases often involved "taking the waters" by bathing or ingesting.

Nonetheless, despite Gibbs' apparent breakthrough — the culmination of three years' research — he remains unable to fully translate every recipe, as the manuscript is missing its index.

The 15th century cryptic work is named after Wilfrid Voynich, a Polish book dealer who purchased it in 1912. Voynich himself alleged it had been written by Roger Bacon, a 13th century friar and philosopher who concealed his works with code, so the religious establishment couldn't decipher what he'd written — although that theory was jettisoned when the manuscript was carbon dated and found to have originated between 1404 — 1438.

Over time it has attained a mythological reputation, featuring in hit computer game Assassin's Creed, as well as the Indiana Jones novels — Jones decodes the manuscript, and uses it to find the Philosopher's Stone.

The text is now held in the Beinecke Library at Yale University.