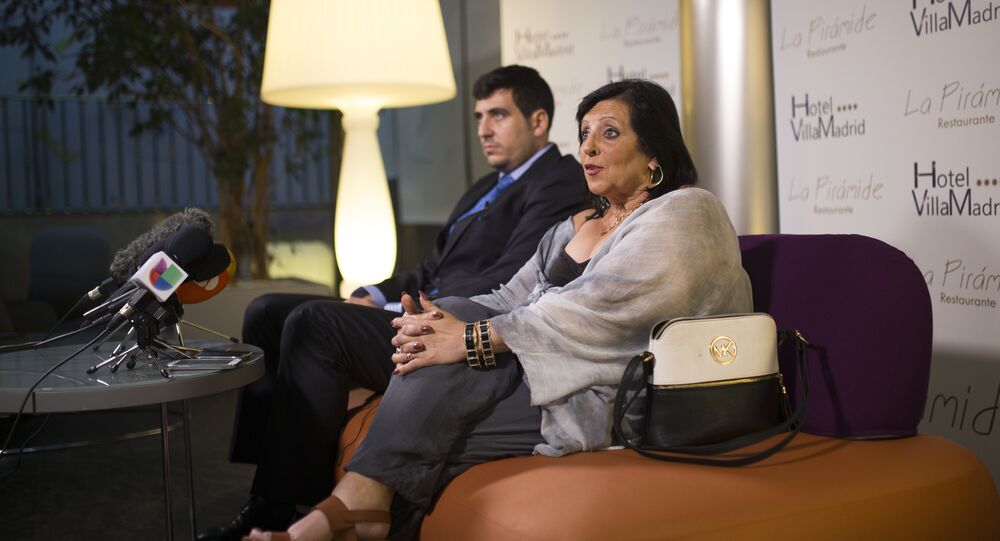 In Pursuit of Dali's Genes: Great Artist 'Would Have Liked' Being Resurrected

Family and friends of the late Salvador Dali knew from the very beginning that the Spanish tarot card reader Maria Pilar Abel was not his daughter, the artist's friend Carlos Velilla told Sputnik.

In July, Dali's body, which had been embalmed and laid in a crypt in the Dali Theatre and Museum in his home town of Figueres, was exhumed and DNA samples were taken.

However, now the results are in and they prove categorically that Pilar Abel is not Dali's biological daughter, the Gala-Salvador Dali Foundation said on Wednesday.

Carlos Velilla, a Professor at the University of Barcelona who was a friend of Dali, told Sputnik that the revelation does not come as a shock to those who knew the artist personally.

"It was clear from the beginning that she (Maria Pilar Abel) was not his daughter. We all knew it," Velilla said.

© AP Photo / Eustache Cardenas, File
Salvador Dali: 10 Surreal Facts You Might Not Know About Bizarre Maestro
Velilla said that Dali would have enjoyed the fuss surrounding his "resurrection."

"He would have liked it because he always thought he was immortal, but they made a huge error."

"Her [Pilar Abel's] mother started to say things to her, and she believed her. This story is very unpleasant for the reputation of a great artist. It was another level, they took a paternity test and in the end it was very clear that he is not her father."

Velilla explained that he got to know Dali in the 1970's and they discussed many topics regarding art and philosophy.

"In the year 1975, I was connected with his critic Santos Torroella and we went many times to his house in Port Gat and in Figuerres, also to the museum. He would talk about his projects and the paintings he would like to do. It was the world of surrealism, and I think he was a very intelligent artist when it came to psychology and science."

"He knew all the important personalities and was concerned particularly with Freud and Kant and mathematics. He always knew what was going on all over the world. He always said that he was a better writer than he was an artist," Velilla told Sputnik.

© Fotobank.ru/Getty Images /
Russian Artist Celebrates Ronaldo's Ballon d'Or by Painting His Portrait With Her Breasts
Maria Pilar Abel Martinez, a tarot card reader who was born in Girona in 1956, had claimed to be the result of a liaison between Dali and her mother, Antonia. In 2015, she launched a court case against the Spanish Ministry of Finance, as the trustee of Dali's estate, and the Gala Dali Foundation.

If the test had proved that Pilar Abel was related to Dali, she would have been entitled to a share of his estate.

When he was exhumed, it was reported that Dali's famous moustache had remained intact since the burial in 1989, and still "marking [the time of] 10 past 10," his embalmer said.

Abel launched the campaign because her mother and grandmother had told her that she was related to Dali, but many experts familiar with Dali's life had cast doubt on the claim, since he showed no interest in having children and had an unusual attitude to sexuality.

He married his muse Elena Ivanovna Diakonova, also known as Gala, in 1934, and they had no children.

The artist once claimed, "Great geniuses produce mediocre children, and I don't want to go through that experience."

'I See Things You Don't See!' Artist Transforms the World With Paper Cutouts