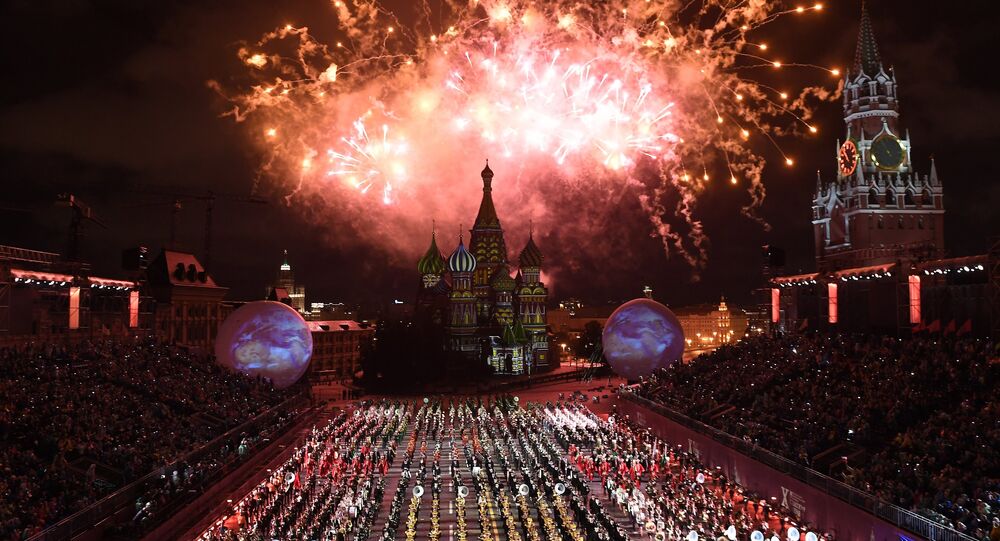 On weekends the Russian capital's landmark spot is a favorite place for thousands of Muscovites, and on Sunday they could see and hear bands and orchestras from all over the world.

The Poklonnaya Hill is one of Moscow's historical landmarks, and includes a park dedicated to Russia's victory over Napoleon's French army as well as a Hall of Remembrance, where the records of the 26 million Soviet citizens who died during the Great Patriotic war (also known as World War II) are kept.

During weekends the popular urban area is packed with locals and foreign tourists, and, on the second day of the "Spasskaya Tower" festival, organizers picked it as a stage for a free live performance.

Some participants, like China's Wudang martial arts troupe, looked very different from others. Even the way they walked to the venue — carrying traditional hand fans — was nothing like the Western marching style.

Taoist monks from the country's Wudu Wushu school are in Moscow to demonstrate their unique martial arts style as well as their philosophy and way of self-improvement.

"It's the second time that we're attending this festival. I like the atmosphere here in Moscow and I would like to thank the organizers," said Wudang martial arts master Hu Liqing.

Some bands, like the EU's own Celtic Massed Pipes and Drums, have become local celebrities.

"I get a pipe band together every year for this festival. It's been 12 months of administration work involved. We've got here pipers and drummers from all over Europe… All my people are really, really
happy to be here and they are chuffed to play music for Russian people"

Besides the 120-bagpipe Celtic band, the festival's audience will see 50 Scottish dance performers, as well 28 other bands and orchestras from 14 countries.

The closing ceremony of the Spasskaya Tower will be held September 3 in Moscow's Red Square.