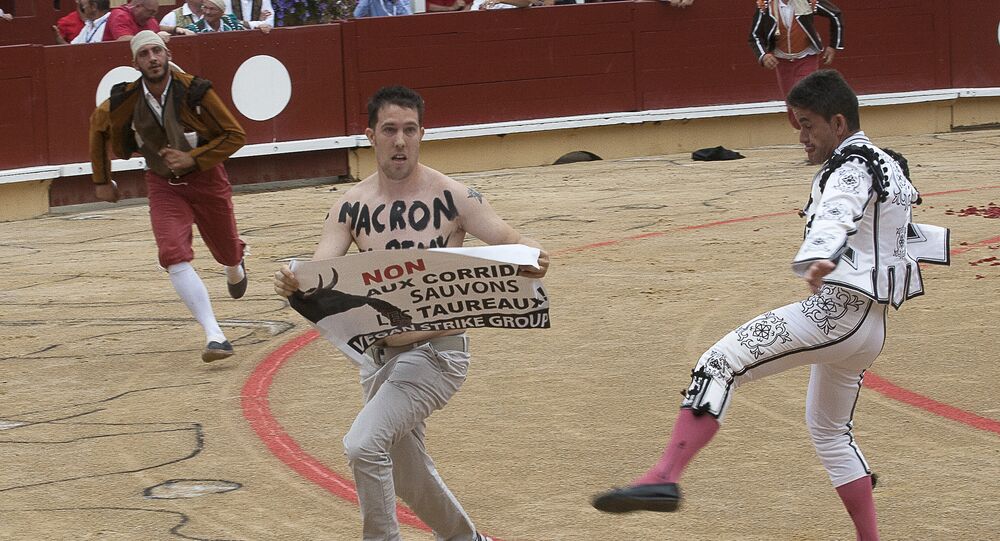 An animal rights activist jumped into the bullring during a summer festival in Bayonne, France on Tuesday, tearing his shirt to reveal a message to French President Emmanuel Macron.

The slogan written on the activist's torso read: "Macron, you can stop this." The protester also rolled out a banner denouncing the traditional sport: "No to the corrida [Spanish for bullfighting], save the bulls. Vegan strike group."

According to Le Monde newspaper, the protester has been identified as a 34-year-old Dutchman who has a record of jumping into more than 30 bullrings and dolphinariums in France and other countries as well.

© AP Photo / Alvaro Barrientos
Running With the Bulls in Pamplona: The Festival of San Fermin
14
Vegan Strike Group addressed Tuesday's incident, publishing a statement on their Facebook page saying that the activist was calling on Macron to "implement the abolition of bullfighting" and to help stop "confusing barbarism and tradition."

Bullfighting is a traditional sport in Spain, France and Portugal. Professional bullfighters have to face a bull and subdue or kill it. Although the history of bullfighting spans more than a thousand years, animal rights groups say that the tradition is cruel and archaic, and should be outlawed.