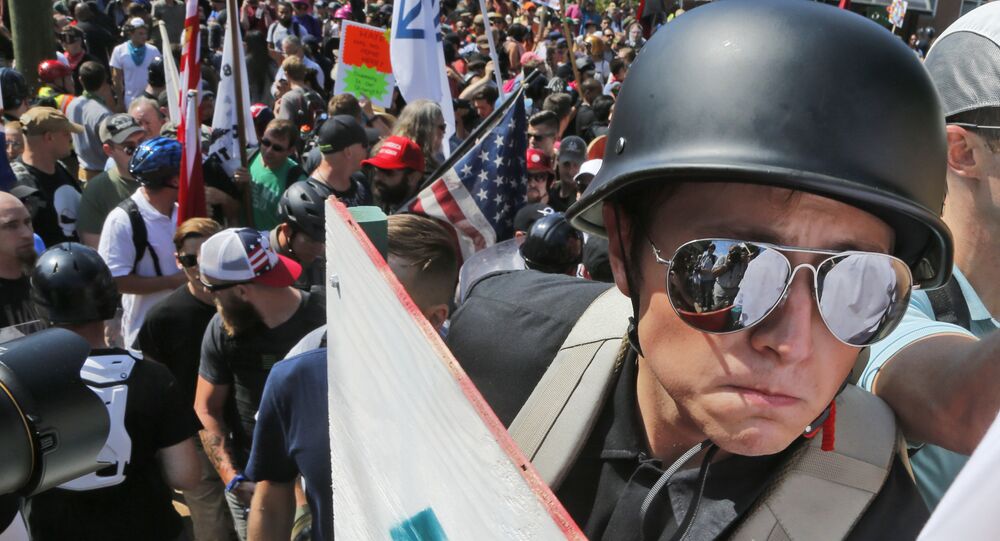 What was touted as a main event rally by US white supremacists has shown those supporting the ugly sentiment to be - like the Wizard of Oz after stepping away from his devices - loud, tragicomic and pathetic, but hardly a movement.

Following assertions that Saturday's white supremacist rally in Charlottesville, VA, would be their largest of the year, city officials noted — in spite of one counter-protester death and many injuries — a smaller turnout that was almost entirely male and white, possibly due to a large influx of counter-protestors and multiple statements by elected and appointed officials in the region downplaying the event and refuting its message of hate.

After alt-right groups including Unite the Right and the National Socialist Movement staged their intention to march in Charlottesville, the site of an intended removal of a hotly-contested Civil War statue, city Mayor Signer — who condemned the rally as racist and a "parade of hatred" — and University of Virginia president Teresa Sullivan publicly refuted the marchers.

US Speaker of the House Paul Ryan (R-WI) labeled the white supremacists' message as "repugnant."

Terry McAuliffe, Virginia's governor, urged people to avoid the rally, stating: "Many of the individuals coming to Charlottesville are doing so in order to express viewpoints many people, including me, find abhorrent. As long as that expression is peaceful, that is their right. But it is also the right of every American to deny those ideas more attention than they deserve."

"I want to urge my fellow Virginians who may consider joining either in support or opposition to the planned rally to make alternative plans," he said, cited by The Guardian.

A Charlottesville city manager had previously stated that the rally would see the largest Virginia State Police deployment in the state in almost 30 years.

US President Donald Trump, notorious for his random and frequently unhinged tweets, was silent until 1 pm on Saturday, finally tweeting: "We ALL must be united & condemn all that hate stands for. There is no place for this kind of violence in America."

But a former Ku Klux Klan leader and vocal Trump supporter attacked the president's tweet in social media, stating: "Remember it was White Americans who put you in the presidency, not radical leftists."

Much of the anger involves a February city council vote to remove and sell a statue glorifying a Civil War-era military leader and slave owner, renaming the statue's location in the process to Emancipation Park.

The campaign to remove the statue was begun by a local high school student following many similar Confederate monument removals that were initiated by a June 2015 massacre of nine black churchgoers in Charleston, South Carolina by an avowed white supremacist male.

According to Usatoday.com, the statue's removal has been placed on hold until November, pending a court injunction.

Expressing the views of many in refuting the hate-filled message of the white supremacists, a local counter-protester at the Saturday rally stated, "I don't want violence, we don't want violence, that's not our MO. We want to be able to demonstrate against their message and assert our civil rights," cited by The Guardian.

Another counter-protester noted the seemingly pointless anger of the white supremacists, stating: "These people don't have a message, their message is hate and violence. This is a spiritual war we're in," according to the BBC.

The civil rights Southern Poverty Law Center has noted that "Trump's run for office electrified the radical right, which saw in him a champion of the idea that America is fundamentally a white man's country," cited by The BBC.

At Least 1 Killed, Over 30 Injured in Charlottesville Far-Right Violence