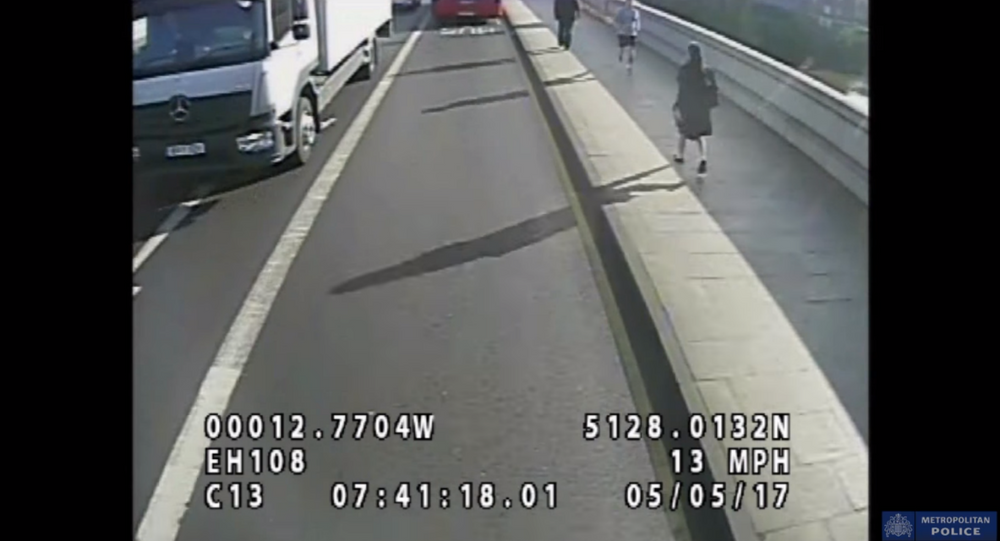 British authorities on Tuesday revealed to the public footage of a jogger pushing a pedestrian into the path of an oncoming London bus.

Captured by CCTV surveillance, the video shows the 33-year-old victim walking across the Putney Bridge in southwest London when – out of nowhere – a man jogging past pushes her into traffic.

​Luckily, and at the very last moment, the bus was able to veer away from the woman.

"The victim was put in extreme danger when she was knocked into the road," Sergeant Mat Knowles, the investigating officer from the Putney Safer Neighbourhood Team, said in a press release. "It was only due to the superb quick reactions of the bus driver that she was not hit by the vehicle."

While the woman only received minor injuries, police noted that passengers quickly got off the bus and came to her aid after realizing what had happened.

According to the Metropolitan Police, the jogger returned 15 minutes later as he crossed the bridge again, but ignored the victim when she tried to speak with him.

Though the incident occurred in early May, officials are now appealing to the public for any witnesses to the incident or residents that recognize the jogger to come forward.

"We are keen to speak to the jogger in the CCTV about what happened that morning," Knowles said. "We would urge him or anyone who recognizes him to get in touch with us as soon as possible."

The jogger, wearing a light grey t-shirt and dark blue shorts, is described as a white man, aged early to mid 30s, with brown eyes and short brown hair.