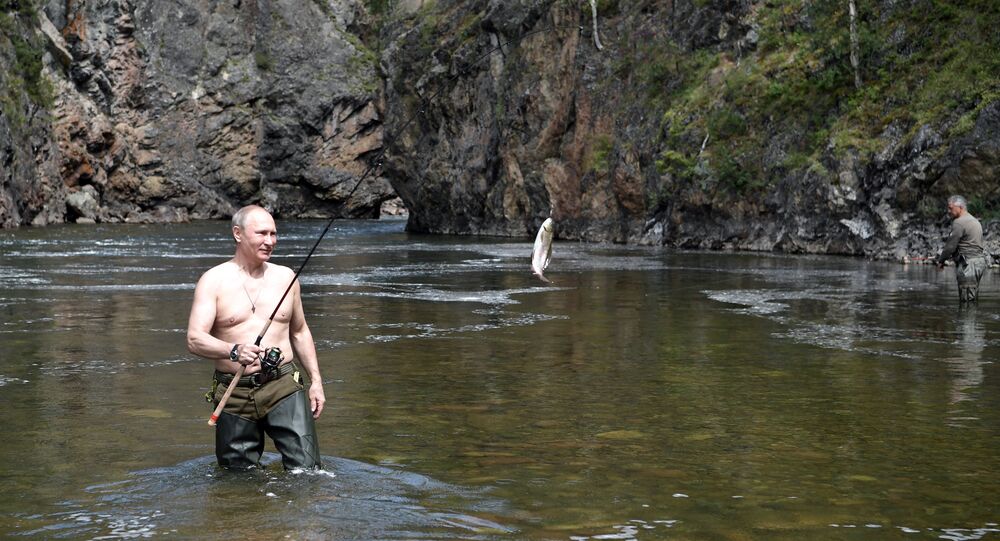 The video depicting the Russian leader catching a giant pike was published on the website of Zvezda TV channel on Saturday.

According to the website, Putin's diving mask was equipped with a GoPro camera. The video shows how the president is getting ready for diving, and then how he catches a huge pike and swims back with his "prey."

During his fishing trip, Putin demonstrated a good physique. This can be seen in the pictures taken during his short vacation.

One of the images depicts the 64-year-old Russian president diving into a lake in a special diving suit. In another picture, Putin is shown swimming in the middle of the lake without his wetsuit, despite the low water temperature.

Several pictures show Putin holding a big fish in his hands. The Russian president has long fishing boots on his feet.

© Sputnik / Aleksey Nikolskyi
Russian President Vladimir Putin fishing at the cascade of mountain lakes in the Republic of Tyva, during his vacation on August 1-3

According to Kremlin spokesman Dmitry Peskov, Putin had a good opportunity to sunbathe. In some pictures, he sits in a folding chair with a bare torso, wearing sunglasses.

On Thursday, Peskov said that Russian President Vladimir Putin had a successful fishing trip in South Siberia, which proved to be more exciting than his previous fishing experience.

© Sputnik / Aleksey Nikolskyi
Putin's Fishing Trip: How Russian Leader Chased Giant Pike (VIDEO)
During a two-day stop in South Siberia, Vladimir Putin had "chased" a giant pike for two hours, but finally managed to catch it, Dmitry Peskov told reporters.
On Thursday, the Russian president held a meeting in the city of Blagoveshchensk on the implementation of investment projects in the Far East Federal District.

According to Peskov, Putin briefly went fishing in the boreal forests of South Siberia before the meeting.