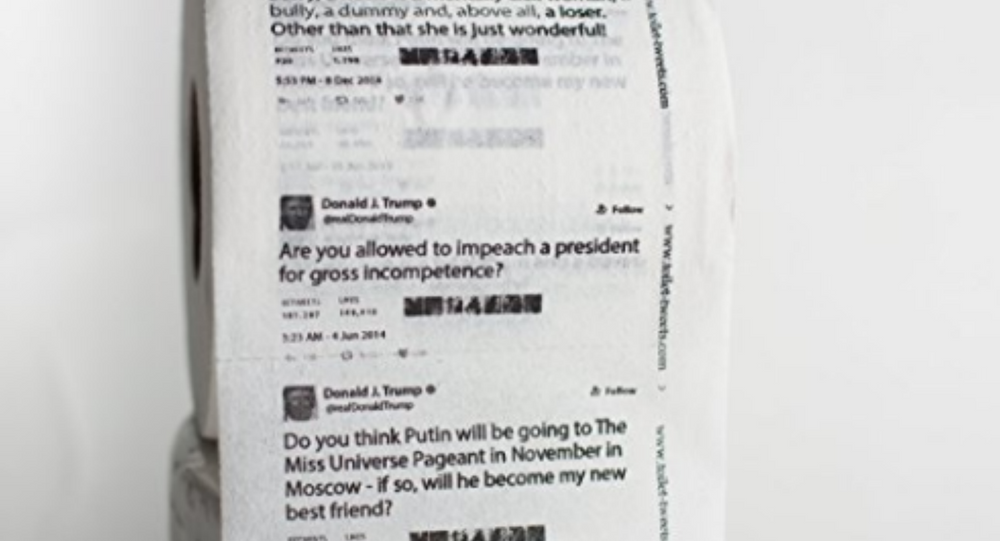 Adding to the growing industry of gag gifts themed around the commander-in-chief, Amazon is now offering next-level toilet paper that features US President Donald Trump’s most ironic and controversial tweets.

What masterpieces did Toilet Tweets, the company behind the magnificent creation, pick for its product, you ask?

One poked fun at POTUS’ 2012 opinion on the election.

​Another from when he questioned the circumstances under which a president could be impeached.

​And this classic specimen, when he said the US should stay out of Syria.

​While the 2-ply paper was selling for $11.99 on Amazon, your bum will sadly have to go tweet-free for the moment since sales have already, ahem, wiped out the company’s inventory.

However, rest assured, as you await the grand return of "Donald Trump Classic Tweets Toilet Paper," there’s also "kissy face" toilet paper at Walmart over yonder for the meager price of $6.12 if you’re desperate.

Incidentally, Amazon is the latest body to join The Donald’s unfriended list. Since taking office POTUS lashed out at Amazon CEO Jeff Bezos for, as he explains it, using The Washington Post, a company Bezos acquired in 2013, to protect Amazon from "paying internet taxes."

US Secret Service Booted From Trump Tower Over Lease Disagreement

Trump to Take 17 Days Off, After Years of Bashing Obama for His Vacations