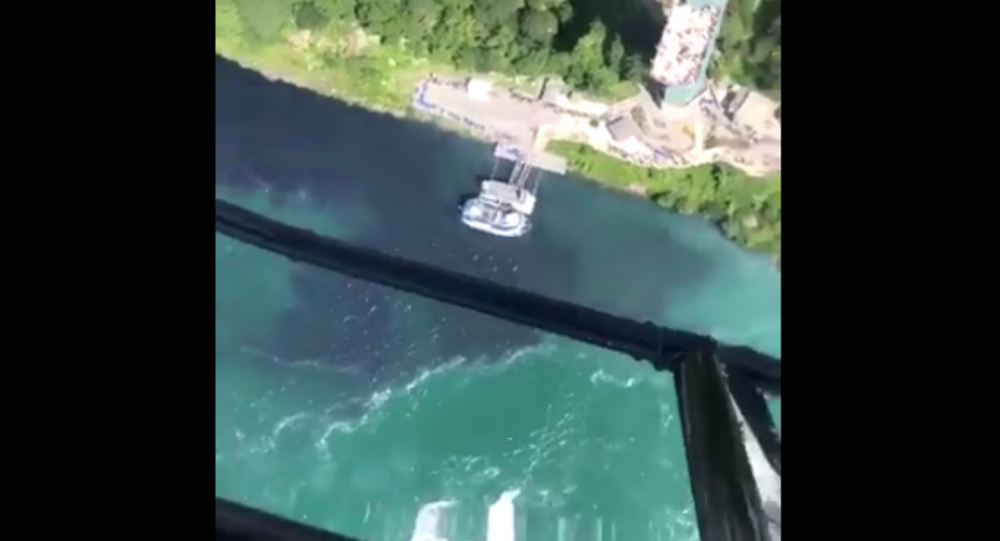 Remember when TLC’s 1994 hit song told listeners to not go chasing waterfalls? It seems the popular Niagara Falls is one you definitely want to steer clear of–at least whenever sewage work is being conducted.

Youtube / Wise Guys
The Beauty of Tilt Shift: A New Angle on Niagara Falls
It was a beautiful Saturday afternoon, when all of a sudden sheer horror struck flocks of tourists and business owners alike as a dark discharge invaded the area, bringing with it a putrid smell.

"I was just praying it wasn’t an oil leak," Pat Proctor, vice president for Rainbow Air Inc., a local helicopter tourism agency, told Buffalo News. "It looked like something out of a sci-fi movie."

​Luckily for Proctor, and dozens of others, it wasn’t an oil leak. It was a sewer discharge that came from the Niagara Falls Wastewater Treatment Plant.

Despite having the paperwork that said all signs were go on the release, it didn’t help in calming residents and owners.

"We were shocked," Nick Melson, a Niagara Falls city administrator, told Buffalo News. "We were caught off guard. We had to do some digging ourselves to find out what was going on. And we were very upset that we weren’t notified."

Not alone in their frustration, businesses like Maid of the Mist, a boating tour company, chose to vent their inquiry on Twitter.

​The Niagara Falls water board later explained that one of their sewage plant’s filtration basins had to be flushed out ahead of scheduled maintenance. While such events typically occur during the spring and fall, it couldn’t be avoided do to plant upgrades planned for Monday.

"We don’t normally do this during the tourist season," Rolfe Porter, water board executive director, told the paper.

Though the sight and smell lingered for hours it eventually dissipated overnight and was fully gone by 8:00 a.m., reported Melson.

The sewage discharge doesn’t normally change the color of the water, but Porter indicated the water had an altered color due to the sediment that was released from the bottom of the basins.

Moving forward, officials say they will work to better inform the community of any further work in the future in the hopes of easing concerns.