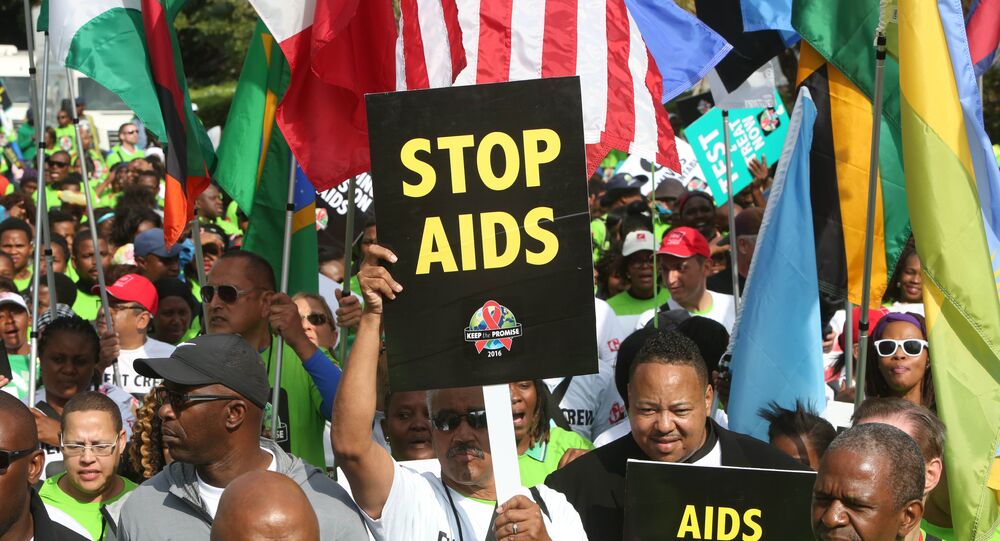 A nine-year-old girl in South Africa who was born with HIV has been in remission from the virus for more than eight years after a course of treatment when she was a baby. Dr. Anthony Fauci, Director of the US National Institute of Allergy and Infectious Diseases, told Radio Sputnik that her case offers hope for a HIV vaccine.

A nine-year-old South African girl who was born with HIV has been in remission from the disease for eight years after she received a short course of early treatment, scientists announced at an AIDS conference in Paris on Monday.

The child took part in a HIV treatment study when she was two months old and was given a 40-week course of HIV drugs. Since then she has not taken any drugs and tests on the nine year old found signs of the virus in a small number of immune system cells, but none capable of reproducing.

A small proportion of people infected with the HIV virus appear to have a genetic mutation that makes them resistant to the development of the disease, but in this case scientists think the early treatment is the key to the girl's remission status. The case is just the third known example in which a child infected with the HIV virus at birth went into remission after early treatment.

Dr. Anthony Fauci, Director of the US National Institute of Allergy and Infectious Diseases, told Radio Sputnik that the clinical study the girl took part in was an attempt to find out how long-lasting the effect of early HIV treatment is.

"Historically, when you treat adults, even if you successfully suppress the virus, when you stop [treatment] the virus invariably rebounds back to its high level in the blood and usually does that in a matter of a few weeks to a month. But years ago, there was one baby whose mother stopped the therapy almost accidentally and the baby went for 27 months without rebounding and then finally did rebound. So, the study was done to see if you could have more children – babies – who could have prolonged remission and this girl was really an extreme outlier in the positive sense," Fauci explained.

"She's about nine years old and she still hasn't rebounded so that's important information to have us try and figure out what the mechanisms are that are keeping her virus suppressed even though her antiviral drugs have been discontinued."

© Sputnik / Alexandr Kryazhev
South African Baby Born With HIV Remains Symptom-Free Years After Treatment
When she was a baby, the girl received standard antiretroviral therapy to fight the HIV virus. Medical advances mean that these drugs are now very effective at fighting the virus but as soon as HIV-infected people stop taking the drugs, the virus starts to replicate in the blood.

"We didn't eradicate the virus from the baby, the virus is still in there, she's just controlling it now without viral drugs whereas before you needed antiviral drugs to suppress [the virus]. She doesn't need them, at least for the time being."

"Was it that she generated a good immune response against the virus? Was there something about her specific virus that once she got treated for so long, any aspect of the virus that was competent is no longer there and the only thing that's left is virus that doesn't have the ability of replicating?"

The answers to those questions could potentially help scientists to come up with a vaccine for HIV, for example if the girl's body is producing some of HIV suppressant.

"If we can identify what that response is, we may be able to induce it with a vaccine in other people to allow them to be either protected against getting infected in the first place, or to get them to have viral suppression even after we stop drugs."

It's impossible to predict whether the girl in question will stop suppressing the virus some time in the future, but the longer she is in remission the better her chance of never developing the disease.

"Years ago, we thought that we had cured the Mississippi baby from the US and 27 months later she rebounded. This young person has now been out eight plus years, the longer that the child stays without rebound the better the chances that she will never rebound but we can't put a number on it right now."

© CC BY 2.0 / momo / Israel National Flag
Undocumented Immigrant Arrested on Suspicion of Infecting Israeli Girlfriend With HIV
Since AIDS was first identified in 1981, scientists have developed effective treatments but are still searching for a cure or vaccine. The reason why a cure is so hard to find is because HIV is a unique virus with the capability of integrating its viral components – its RNA and DNA – into the body's cells.

"It gets into your cells and integrates itself into your own genes, into your own chromosomes, so it's very, very difficult to eliminate it. Whereas, if you have a common virus like influenza it just attacks the cells of the nasal mucosa and the lung mucosa, after a while the virus goes away and you're done, it's not there anymore. That's not the case with HIV, once it integrates into your cells it's very difficult to get rid of which is why even though medications are effective in suppressing the virus, they are not effective in eradicating the virus," Fauci explained.