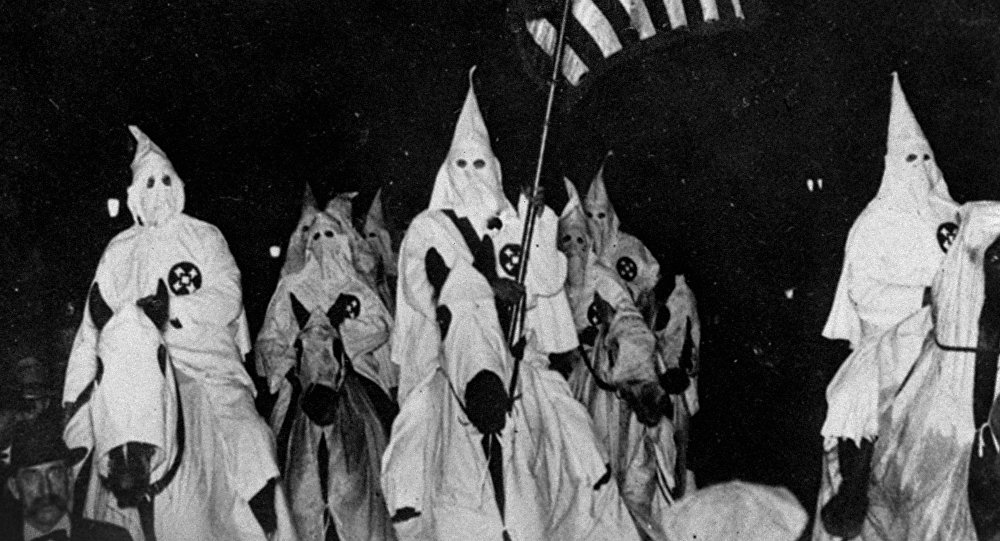 A town in Florida is engaged in a battle over whether to rename a number of streets which are linked to the slave-owning Confederacy. Protesters, many of them African-Americans, want to remove street names belonging to Confederate generals such as Nathan Bedford Forrest, who later became one of the founders of the Ku Klux Klan.

But a group of residents and businessmen in Hollywood, Florida, are trying to stop the names being changed.

​The Save Our Streets coalition was created by people who live and work on Lee, Hood and Forrest Streets.

They are named after General Robert E. Lee, the commander of the Confederate Army, General John Bell Hood, and General Nathan Bedford Forrest, who later founded the KKK.

The Confederate generals, who fought to defend the right of southern states to maintain slavery, lost the 1861-1865 US Civil War to the Union army.

One of the group's members, Sylvia Koutsodontis, said the streets had borne the same names since the town was built in 1926.

Several cities in the Deep South, like Orlando and New Orleans, have already removed street names with connotations with slavery and the Confederacy and in 2015 South Carolina's governor agreed to stop flying the Confederate flag — known as the Southern Cross — from the Capitol building.

But many of the residents of Hollywood, Florida feel the street names are harmless and historic.

"It started with the African-American Council, they came into our town two years ago and they wanted to change our street names," Mrs. Koutsodontis explained to Sputnik.

She said she felt the city council in Hollywood had bowed down to "outsiders."

​"The city council went behind our backs and didn't even have it on the agenda and they went ahead and agreed to change the names of the streets. They blindsided us," she told Sputnik.

Mrs. Koutsodontis, who was born in Pittsburgh but moved to Florida in 1962, said the town had a mixture of black, white and Hispanic residents and she said many local African-Americans were opposed to the change.

But Cynthia Mitchell, who has lived on Hood Street for 23 years, disagreed.

"Here is a black neighborhood and to have a street after those people set up, I don't think we should have that," she told a local TV station.

Under the proposal, Forrest Street will become Savannah Street, Hood will change to Macon Street and Lee will become Louisville Street.

The council is due to make a final decision on August 30 and the Save Our Streets coalition is stepping up its protests, with support from Save Southern Heritage, a group which defends the history of the Confederacy, which is a hugely contentious issue.

"Hollywood residents feel exactly the same way about their history as others do where polls have been conducted — they don't agree with Black Lives Matter, Anti-Fa and other Marxist/socialist radical groups that American history should be taken down," said David McCallister, a Save Southern Heritage spokesman.

In 2016 Florida officials fought unsuccessfully to get the statue of Confederate General Edmund Kirby — which the state erected in 1922 — removed from the Statuary Hall of the US Capitol.

Earlier this week a plan was floated to put up a statue of Snooty the manatee to replace a contentious Confederate memorial outside the courthouse in Bradenton, Florida.

Street names and even the names of cities and countries can be hugely contentious.

In Southall, a district of west London which has a large community from the Indian sub-continent, there have been calls to change the name of Havelock Road.

The road is named after Major General Sir Henry Havelock, a British commander during the Raj, who put down the Indian Mutiny in the 19th century with considerable brutality.

Several of the cities which will host next year's World Cup in Russia have changed their names a number of times.

St. Petersburg was founded by Peter the Great in the 18th century but during the First World War, when Russia fought Germany, its name was considered "too German" and was changed to Petrograd.

After Lenin's death in 1924 it was renamed Leningrad but after the dissolution of the Soviet Union in the 1991, its name reverted to St. Petersburg.

Volgograd, which will host several World Cup group games, was founded in the 16th century and known as Tsaritsyn. In 1925 it was renamed Stalingrad, after the Soviet leader Joseph Stalin and it was under this name that it came under attack from Hitler's forces during the Second World War.

Stalin was determined not to lose the city, because of the symbolic value of its name, and he ordered the Red Army not to retreat.

#TheMotherlandCalls is a statue on Mamayev Kurgan in #Volgograd, #Russia, built in commemoration of the #victory in the #BattleofStalingrad pic.twitter.com/A4NcpDUlly

Eventually, in the depth of the Russian winter, Marshal Zhukov launched a counterattack and surrounded the German forces who were forced to surrender, much to Hitler's chagrin.

The city, on the banks of the Volga, was given its current name in 1961 by Nikita Khrushchev after the demise of Stalinism.