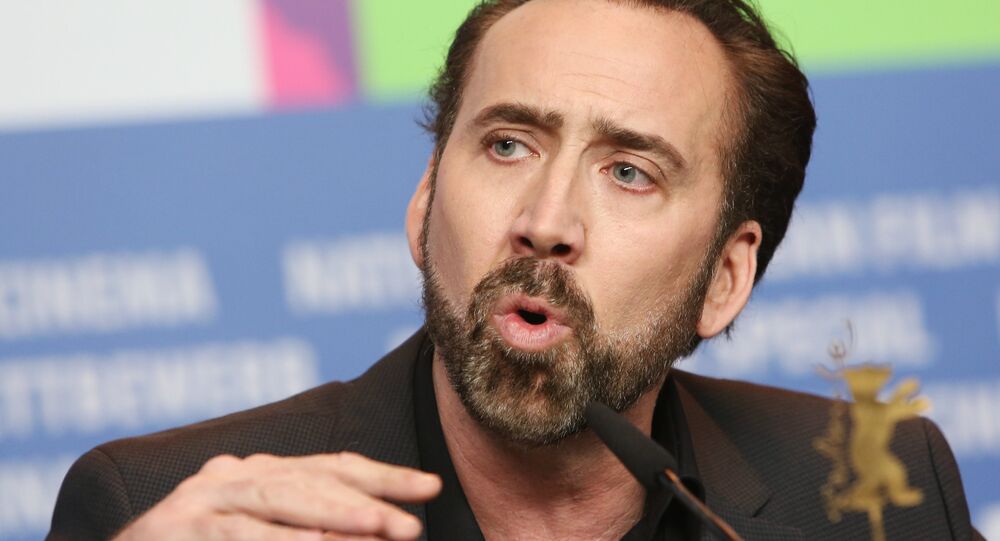 Oscar-winning US actor Nicolas Cage has been the inspiration for a hilarious new meme, after a picture of him emerged on social media with a blank facial expression during a visit to Kazakhstan.

Mr. Cage, who is famous for films such as Con Air and The National Treasure, is in Kazakhstan for the 13th Eurasia International Film Festival, which is being held in the capital city of Astana.

Cage receiving a badge with the US and KZ flags as a symbol of the friendship between both countries. #Eurasia #FilmFestival pic.twitter.com/GnhgnJQaaz

During the press conference prior the festival this morning. #Eurasia #EIFF pic.twitter.com/gCyIwBf1Ly

The actor is pictured standing next to famous Kazakh violinist Aiman Musohodzhaeva, wearing a traditional outfit.

In fact, many mainstream media outlets have made the mistake of confusing the accomplished musician with the country's First Lady, Sara Nazarbayeva.

Mr. Cage, who is no stranger to having memes of himself, has once again sent the internet into global meltdown.

One Twitter user couldn't wait to compare Nicolas Cage to the US comedian Yakov Smirnoff.

​Another commented on how Mr. Cage looked so "blessed" and happy to be part of the proceedings, and his blank facial expression conveyed it perfectly — not.

Yo, Nick Cage's in Kazakhstan, I feel so blessed. Look at him. Look at how happy he is #NicolasCage #NicCage #Notthebees pic.twitter.com/OcPokM7Otk

I'm guessing this is exactly what it would look like if Nicolas cage starred in a remake of Quantum Leap. #nicolascage #quantumleap #ohboy https://t.co/5Dz3ljcAt8

​Author and political commentator, Ian Bremmer said that with his new found position, Mr. Cage has automatically eliminated himself from becoming the next US president.

Nicolas Cage in Kazakhstan.
With new law on political service, won't be eligible for Presidency. pic.twitter.com/ZGoZ2c6vA4

Nic Cage waiting on the father in law… #nicolascage pic.twitter.com/1kp11Dmz8C

Tfw you're Nicolas Cage & you're not sure how you ended up here, but this is your life now pic.twitter.com/vGmxN4cwIH

Nicolas Cage 'Always Wants to Know What Dostoevsky Had in Mind'