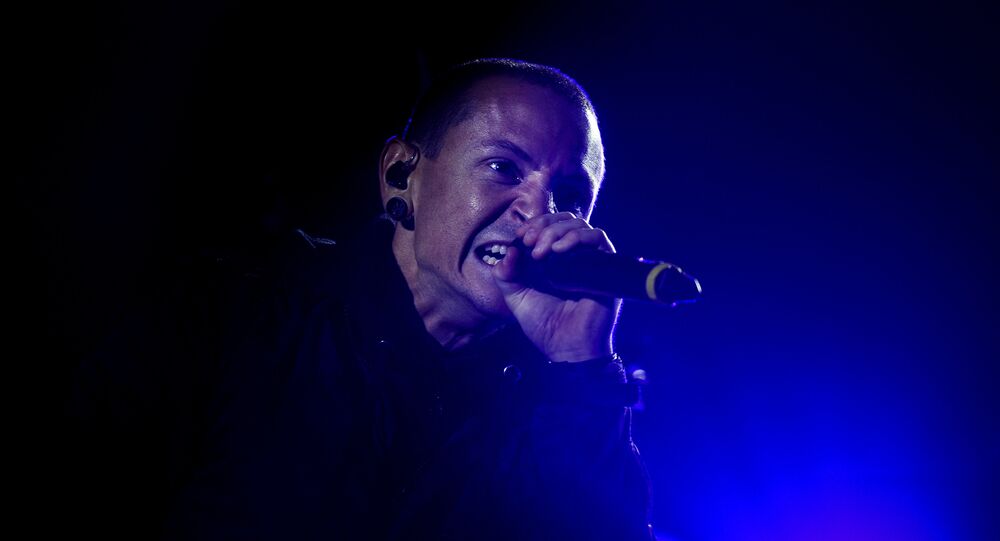 Bennington hanged himself at his home in Palos Verdes Estates, Los Angeles, on Thursday (July 20).

He left behind six children from two marriages.

Bennington had struggled with drugs and alcohol for years, and had admitted in the past he had considered committing suicide due to sexual abuse he endured as a child.

The star hinted at his troubled state of mind in the single, Heavy, which came out in February this year.

"I don't like my mind right now, stacking up problems that are so unnecessary, wish that I could slow things down," he sang.

He was a close friend of Audioslave and Soundgarden singer Chris Cornell, who hanged himself at the age of 52 in his MGM Grand Detroit hotel room back in May.

© AFP 2021 / PAUL BERGEN
US singer Chris Cornell of US grunge band Soundgarden performs during the first day of the 43rd edition of the Pinkpop Music Festival at Landgraaf, in the south of the Netherlands, on May 27, 2012.

After Cornell's death Bennington wrote an open letter to him, recalling the impact his friend had on him, which he shared on Twitter.

Bennington was married to Talinda, a 40-year-old former Playboy model from Arizona, whose Twitter account was hacked into and taken over by a troll, who posted disgusting remarks only hours after the singer's death.

© Photo : Pixabay
Dangerous Blues: WHO Warns That the World Slipping Into Great Depression

Linkin Park's biggest hits include "Faint," "Numb," "In the End" and "Crawling."

The band had just finished a European tour — their last gig together was on July 6 in Birmingham — and were due to go on tour in the US next week.

Earlier this year the World Health Organization warned that more than 300 million people around the world were trying to cope with depression.

Some people cannot fathom the idea that rich and famous people suffer from depression.

​When Gary Speed, the former footballer and Wales football manager, took his own life in 2011 the sporting world was stunned.

© AFP 2021 / IAN KINGTON
A picture taken on March 26, 2011 shows manager of Wales Gary Speed awaiting kick off against England during a Euro 2012 Group G qualifying football match at the Millenium Stadium, Cardiff, Wales. Speed was found dead at his home on November 27, 2011, the Football Association of Wales (FAW) announced - he was 42.

His wife and teenage sons were at his house when he hanged himself, only hours after joking on the set of a TV program.

Depression remains an illness about which little is known.

"Specific events and situations can certainly trigger depression, but the illness is its own separate entity. Depression is not ordinary sadness, disappointment, or grief, although those emotions may blend with the symptoms of depression in the days and weeks surrounding a negative event," writes mental health activist Therese Borchard on her blog.

Cody Lachey, a former soldier who suffers with depression, anxiety and post-traumatic stress disorder, said he was taking prothethazine hydrochloride, citalopram and sertraline to tackle the condition.

"I was sexually abused like Chester Bennington, I attempted to hang myself one and my mum found me depression is horrible to the outside world you look fine but internally you're in turmoil," he told Sputnik.

Every 40 seconds someone dies by suicide. Suicides are preventable. Find out what you can do to help https://t.co/ZFPZrixXBO #LetsTalk pic.twitter.com/CrLGYSeDRY

​"You just want to sleep, you lose interest in everything and anything, you can't focus some times, you can't sleep because your brain is like a washing machine that is constantly spinning and you can't turn your brain off then when you fall asleep. You don't want to wake up in the morning, your self confidence is gone, you don't feel good enough, you want to be dead as you're not living, merely existing the list goes on," Mr. Lachey said.

We need to talk about suicide. We should try & do this responsibly. Our media guidelines can be accessed here: https://t.co/n8OHQT2qta

​"Mental health awareness needs to be highlighted more and sadly it takes the death of celebrities like Chester Bennington, Robin Williams etcetera to get awareness for mental health," he added.

Dangerous Blues: WHO Warns That the World Slipping Into Depression