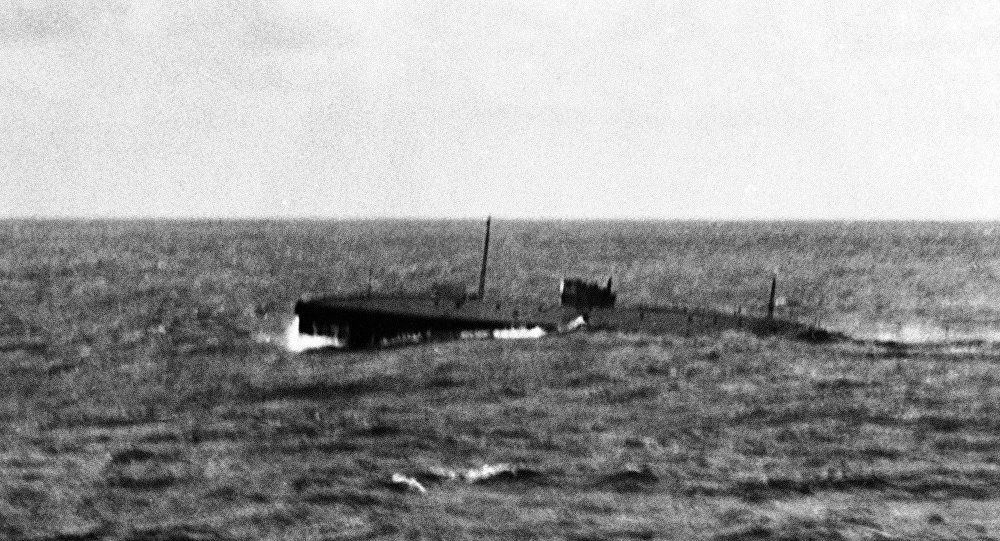 While wreckage of German World War II-era submarines are rather common in the Norwegian fjords, the recent expedition off the city of Bergen focuses on a different kind of relic. Norwegian researchers are going down to the wreckage of a US submarine, which ended its days following arguably the least successful polar missions of all time.

© Photo : Kallegauffin
Dubious Submarine Monument With 'Russian Threat' Undertones Divides Swedes
The G.O. Sars research vessel, which recently returned from the Norwegian archipelago of Svalbard, is being used in a local expedition to explore the remnants of the US submarine Nautilus, which rests at the bottom of Byfjorden off Bergen's coast. Using the remote controlled underwater robot Ægir, which has a max depth of 6,000 meters, the Norwegian researchers hope to shed more light on the Nautilus's history.

"I believe few know it is actually located here. We have German submarines that sank during the war, but this is something special," Rolf Birger Pedersen, the head of the K.G. Jebsen Center for Deep Sea Research, told Norwegian national broadcaster NRK.

The Nautilus was built in the US in 1917 under the name of O-12 to be used against the Germans in World War I, but never fired a single torpedo. In 1930, the government ruled that the submarine would be scrapped.

However, Australian adventurer George Hubert Wilkins, who earlier became the first person to fly across the Arctic Ocean from Alaska to Barentsburg on Svalbard, had other plans. The adventurer's idea was to use the submarine for a similar-minded, yet even more spectacular trans-Arctic voyage starting from Svalbard, passing the North Pole below the ice and ending up in Alaska.

© Wikipedia /
Traces of War: Danes Stumble Upon Mysterious WW1 Submarine
The submarine was renamed after Captain Nemo's vessel in Jules Verne's cult novel and was fittingly baptized with ice water to celebrate its future exploits, but also because it was at the height of the Prohibition.

During a costly reconstruction, the Nautilus was equipped to break ice. Nevertheless, it seemed to be haunted by an endless series of annoying setbacks. First, the engine stalled after immediately leaving the dock. Then a sailor fell overboard a drowned on the way across the Atlantic.

Among the crew, there was geophysics professor Harald Ulrik Sverdrup, who volunteered despite protests from friends and relatives who told him to stay home. A colleague of his even sent a letter stating it would be a big loss for oceanography if Sverdrup went to the bottom in a canned box.

Although the team returned safely home, life on board was no party. The drinking water froze, the hull leaked, but the main thing is that the submarine never reached its goal. In late August 1931, the Nautilus reached the ice edge, but could not dive due to possible sabotage by a terrified crew member, who might have saved his peers from certain death. The Nautilus returned to Svalbard, its members frozen to the bone and reeking exhaust, but alive.

© AP Photo /
Legendary Norwegian Polar Ship to Return Home After Being Icebound for 80 Years
The operation was described by the Norwegian media as a solid failure. The Nautilus returned to Bergen, but because it was unthinkable to bring it back to the United States, and was sunk off the Norwegian port city of Bergen. Ironically, the submarine failed to perform as planned even at its deathbed. The agreement was that the vessel should be lowered to the depth of at least 370 meters, while it found its final resting place at 347 meters.