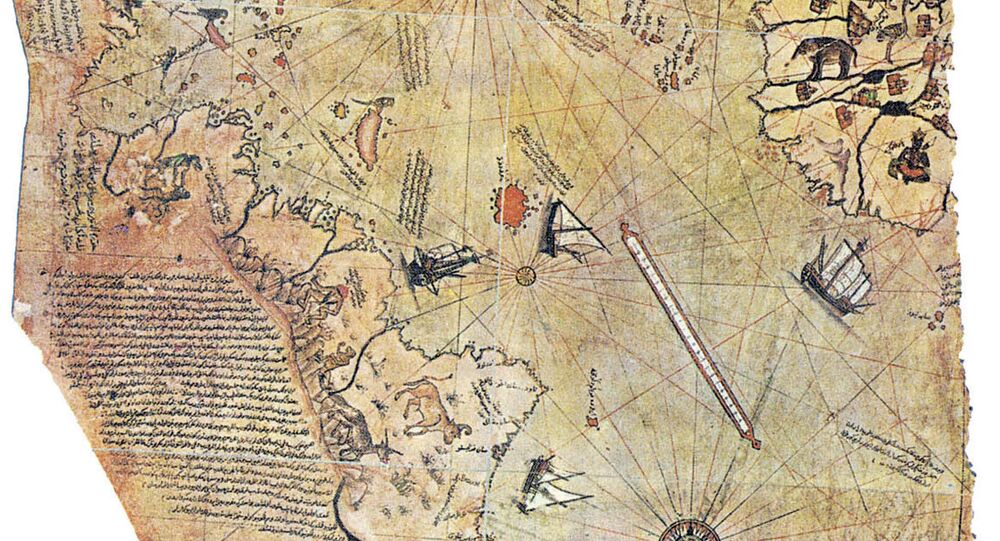 A map drawn in 1513 by a Turkish admiral appears to show the coast of Antarctica as ice-free. Dozens of theories have been put forward to try and explain the mystery of the Piri Reis Map.

In the 16th Century Haji Ahmed Muhiddin Piri was an admiral in the Turkish navy, which at the time never ventured beyond the Mediterranean or the Black Sea.

In 1513, he compiled an extraordinary map of the world which was drawn on gazelle skin, then a common alternative for paper and often used for documents which were designed for long-term reference.

​​The gazelle skin did its job and the map, known as the Piri Reis Map, lasted for four centuries and was discovered in 1929 in the library of the famous Topkapi Palace in Istanbul.

​Gustav Deissmann, the German theologian who discovered it, was shocked and amazed by its accurate depiction of the known world at the time but was baffled by one particular aspect — Antarctica.

​The map appeared to show an ice-free continent when all known geological references suggest Antarctica has been iced over for millions of years.

​The New World had only been discovered by Christopher Columbus in 1492 and the coast of South America was still being explored at the time by Spanish and Portuguese navigators.

Admiral Piri had reportedly used 20 different maps and charts to compile his own map, one of which was drawn by Columbus himself and four were made by Portuguese sailors, who were exploring Brazil, which they would later colonize.

​Several cartographers have claimed the coast bears an uncanny resemblance to Queen Maud Land, which was only discovered in 1820. Nobody set foot on the coast until Norwegian explorer Hjalmar Riiser-Larsen landed in 1930 and named it after the wife of Norway's then King Haakon VII.

​Ironically during the Second World War, when Germany occupied Norway, the territory was renamed by the Nazis as New Swabia.

It was Professor Charles Hapgood, from Keene State College in the United States, who used the map as evidence for his theory about an ice-free Antarctica.

​In his book, Maps of the Ancient Sea Kings, Professor Hapgood claimed the Earth's North and South Poles had shifts 11,000 years ago and an ancient civilization had lived in Antarctica and mapped out its coast.

Erich von Daniken, the Swiss author who became extremely famous in the 1970s with his book Chariots of the Gods and his theories about the Nazca Lines in Peru, even claimed aliens had lived in the Antarctic.

But Steven Dutch, a Professor of Natural and Applied Sciences at the University of Wisconsin in Green Bay, thinks the entire ice-free Antarctic theory is bogus and the map is simply wrong.

In an article in 2010 he described the Piri Reis Map as drifting into the "twilight zone."

"It shows South America swinging far to the east. Given that the map so far has done fairly well in latitude, we can be sure the coastline is not Antarctica," he writes.

"Also, if the map draws on ancient knowledge to show things no 16th century explorer would have known, why is the coastline continuous? So why isn't there open water between South America and 'Antarctica'? You can't seize on an accidental resemblance to a couple of bumps on the coast of Antarctica and blithely ignore the failure to show the Drake Passage," he adds.

Professor Dutch argues the map was simply inaccurate and speculative in the South Atlantic because sailors had not explored it and had no idea in which direction the coast went in southern Brazil.