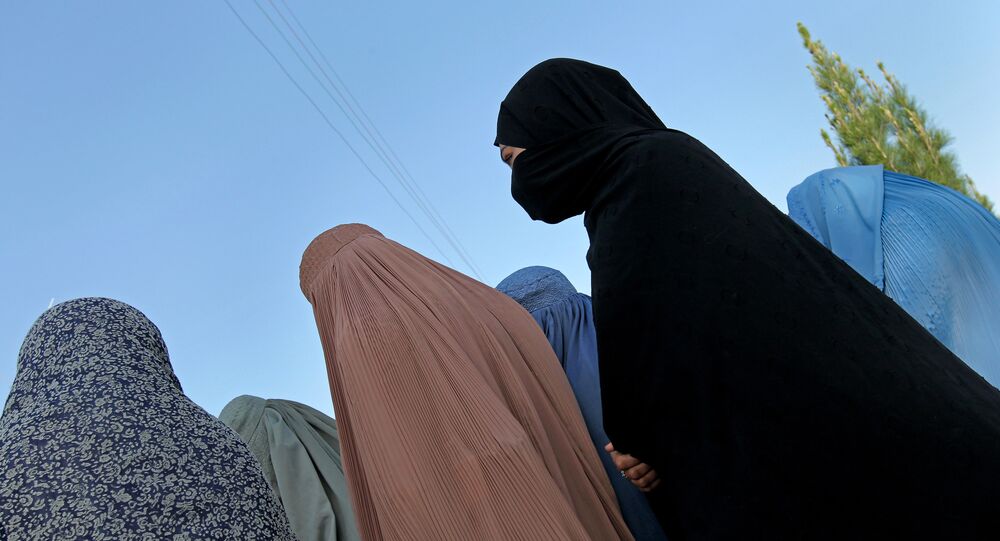 Amid a heated debate over whether to prohibit women from wearing face-covering Muslim headdresses in the workplace in Scandinavia, the Sweden Democrats have moved to forbid any county official from wearing any religious symbols to work at all, whether it's a Muslim headdress or a Christian cross.

© AFP 2021 / Johan NILSSON / TT News Agency
SAS to Headscarf-Wearing Woman: Take It Off or Seek Another Job
According to a new motion by the right-wing Sweden Democrats, it should be prohibited for county officials to wear political, religious or ideological symbols during working hours.

Earlier, the European Court of Justice ruled that employers have the right to prohibit employees from wearing religious garments, such as the Muslim veil at work. With reference to this, the Swedish Democrats in the county of Sörmland seek to forbid county officials from wearing religious, political or ideological symbols during working hours.

"Healthcare should be neutral as well: if you wear political or religious symbols, you won't be seen as neutral any longer," Anton Berglund said.

© AFP 2021 / PHILIPPE HUGUEN
'Wardrobe Malfunction': Islamic Council Norway Hires Niqab Backer to Top Role
According to Berglund, the ban should be comprehensive and encompass even smaller symbols, such as a cross worn around the neck.

"Personally, I do not think you should have any kind of political or religious symbol visible," Berglund said.

According to Sörmland County Councilwoman Monica Johansson of the Social Democratic Party, it is too early to take a stance on this matter before it has been investigated by officials.

"Generally speaking, though, it's best to refrain from wearing any religious symbols on your work clothes other than a badge with your name and position," Monica Johansson told SVT.

Ironically, SVT's own enterprise Halal TV, which has been running for almost nine years, recently sparked a controversy for featuring a veiled anchor reading the weather forecast.

© AFP 2021 / ODD ANDERSEN
Take it Off! Norway Moves to Ban Hijabs in the Workplace
In the autumn of 2008, the Swedish state media giant attempted to appeal to a broader Muslim public by launching special broadcasts abridged to Muslim standards. 'Halal' is a Muslim term denoting something pure and righteous.

Many users responded to the fact that Swedish TV had no qualms about showing veiled women, while women in a Muslim Arab country like Iraq no longer wear Muslim apparel in front of the camera.

​In 2015, the Bishop of Stockholm Eva Brunne, who was previously hailed as the world's first lesbian bishop, sparked a major controversy with her proposal to remove all signs of the cross and arrange a Muslim prayer room in a church in her diocese in order to make people of other faiths more welcome.