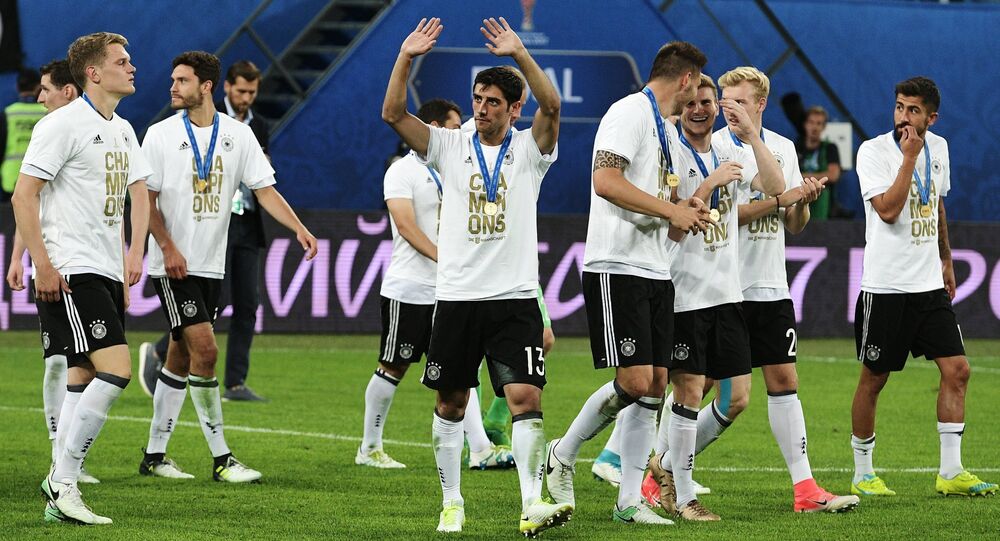 Germany's national football team not only managed to win this month's Confederations Cup in Russia, but they made a dream come true for one young woman from St. Petersburg.

© Sputnik / Alexey Filippov
'A Great Time': German Football Team Captain Thanks Russia for Confederations Cup
After a victorious Confederations Cup, the German association football team also took the time to give some encouragement to a young woman from St. Petersburg, who was a victim of the terrorist attack last April.

Evalina, 24, was injured in the bomb blast which ripped through a subway train carriage in the St. Petersburg subway on April 3. After spending several months in hospital, she was eventually discharged July 5 and is still recovering at home.

When the German association football team heard that Evalina is a big fan of theirs, they decided to give her a present. Evalina was overjoyed to receive a German football shirt, signed by the players and their manager, Joachim Loew.

'The German national team gave a gift to the victim of the subway attack,' the Komsomolskaya Pravda newspaper reported.

​"All the best, Evalina," Loew wrote on the shirt.

Evalina also received a signed photograph from the players of Bayern Munich. She is delighted with her presents, which have given her a great lift in her fight to get back to health.

"That gave me a lot of strength. Now I want to get well soon, and then perhaps I can go and watch a German national game in real life," she said excitedly.