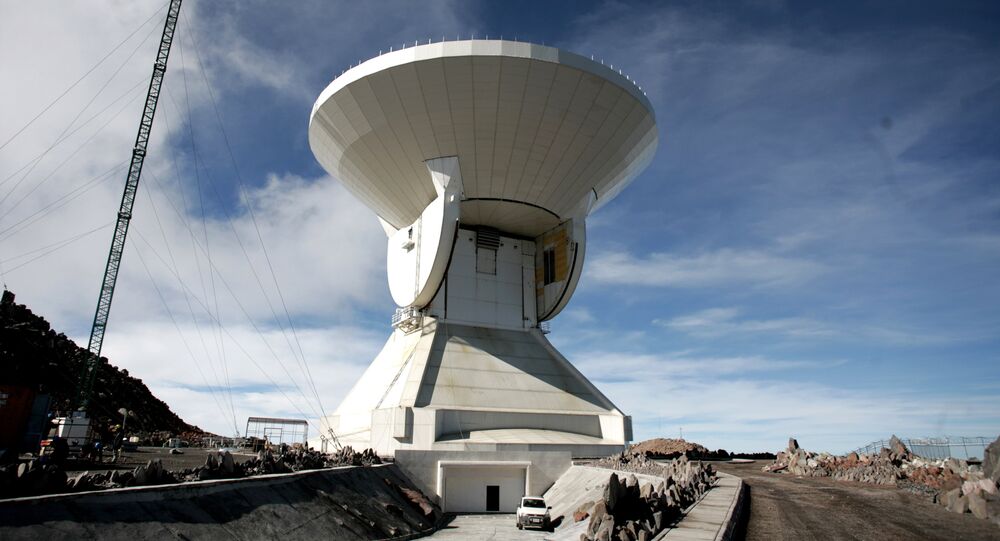 Mounted on the top of the Sierra Negra peak in Mexico, the Large Millimeter Telescope is believed to be the world's largest such device in terms of its frequency range. Sputnik Spain interviewed Mexican astrophysicist Arturo Gomez, one of the scientists who participate in the project.

© Photo : L'Astorina
Sky Shield: Russian Telescope in Brazil Will Protect Earth From Space Junk
The Large Millimeter Telescope is designed for observing radio waves in the wave lengths ranging from approximately 0.85 to 4 mm.

This unique device is needed in order to better understand how our universe was formed and developed.

© AP Photo / Dario Lopez-Mills
The Large Millimeter Telescope is installed on the top of the Sierra Negra peak near the town of Atzitzintla, Mexico. File photo

"In the early 1990s, our colleagues from the University of Massachusetts, together with astronomers from the National Institute of Astrophysics, Optics and Electronics, decided to launch an important astronomy project which could be a step forward in the field of space exploration. They agreed to build the largest telescope at the time," Mexican astrophysicist Arturo Gomez told Sputnik Spain.

Studies in the millimeter range provide a unique opportunity to explore the most remote areas of the universe, where life possibly originated, according to Gomez.

"We work with two instruments. The first one explores distant galaxies, while the other instrument, the bolometer, determines the temperature of celestial bodies. It allows us to take photographs of the starry sky, Gomez said.

The Large Millimeter Telescope in Mexico will be completed late in 2015, having 2000m² of collecting area. pic.twitter.com/Em9ndDWnET

"The scientific task is to follow the shadow of this black hole. This is a very important experiment because so far no one has been able to watch a black hole directly. This is only possible when you examine emissions in the millimeter range," Gomez said.

"To catch this radiation, we need all the telescopes of the world that work in this range, which will help us deal with an interferometry method which will be used. These are very complex studies and it will take years to get at least some results," he added.

According to Gomez, the device will contribute to the technological development of his country and help scientists who work in the field of space exploration.

"In terms of education and Mexico's technological development, this telescope is of paramount importance," he said.

"The telescope adds to the development of Latin American scientific institutes and the expertise gained with the help of this device will prompt other countries in the region to deal with space-related studies, "Gomes concluded.