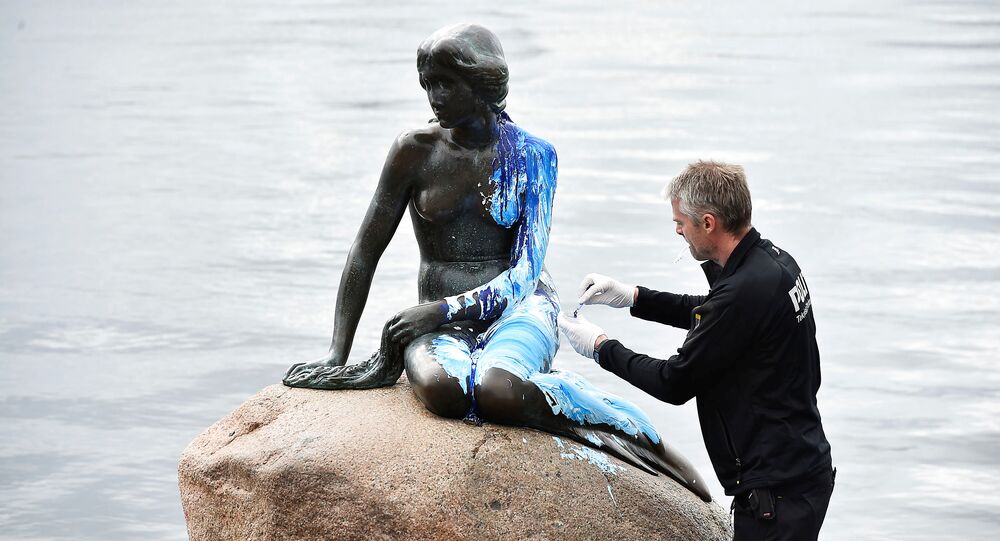 The Little Mermaid sitting on a rock at Copenhagen's waterfront is one of Denmark's most iconic landmarks. However, Denmark's arguably most recognizable lady is also one of the most vandalized statues in the world. Recently, it has been defaced two times in one month.

© Flickr / Taneli Mielikäinen
Rodent Alert! Rats Reside in Cult Monument in Finnish Capital
After being splashed with red in late May, Copenhagen's Little Mermaid statue has been painted blue and white in a recent vandalism attack just weeks after the previous one.

According to Copenhagen Police, the vandals also left a cryptic message, "Befri Abdulle," ("Free Adbulle") on the pavement in front of the statue. According to the Danish newspaper BT, police have not figured out what or who the message was referring to.

However, the police reported they were looking for a "petite blonde 170-centimeter tall girl" in connection with the incident. According to the police, a local discovered the statue in the process of being vandalized while walking the dog in the middle of the night, Extra Bladet reported. No arrests have been made in connection with the vandalizing, Danish Radio reported.

© Photo : Kallegauffin
Dubious Submarine Monument With 'Russian Threat' Undertones Divides Swedes
The Little Mermaid has been the target of repeated assaults over the years. The most recent instance happened on May 30, when the statue was sprayed with blood-red paint by animal rights activists protesting the whaling practices of the Faroe Islands, a Danish autonomous archipelago in the North Atlantic, where pilot whales are being trapped and slaughtered using long knives in a traditional rite called "grindadrap." This gory practice has long ignited the ire of environmental organizations across the globe. The red paint that symbolized the blood of the whales, was removed the same day with the help of jet-wash.

Little Mermaid in #Copenhagen is doused in red paint by animal rights activists protesting against whale slaughter on Tue pic.twitter.com/geWV83y9bP

​While the Little Mermaid is quite accustomed to being defaced with various paints, it has suffered much worse attacks. In 1913, it was unveiled by sculptor Edvard Eriksen, who depicted a fairytale character by Danish author Hans Christian Andersen.

In 1964 and 1998, the mermaid was decapitated. The statue also lost her arm in 1984. In 2003, the whole statue was stolen from its pedestal at the Langelinie promenade in Copenhagen before being recovered and restored.

© AFP 2020 / PHILIPPE HUGUEN
'Wardrobe Malfunction': Islamic Council Norway Hires Niqab Backer to Top Role
On less harmful occasions, it was dressed in a burka in 2004 to protest Turkey's application to become an EU member, as well as football jerseys in Swedish and Norwegian colors to celebrate the sporting prowess of Denmark's neighbors.

In 2014, images of the Little Mermaid were blocked by Facebook for violating the social network's nudity policy and "showing too much bare skin." This led to an outcry from angry Danes who predictably detested the idea of categorizing their national treasure as being on par with child pornography and the like.

​The Little Mermaid also provides an arena for social protests, such as those held against the re-introduction of EU borders amid the migrant crisis in 2015.