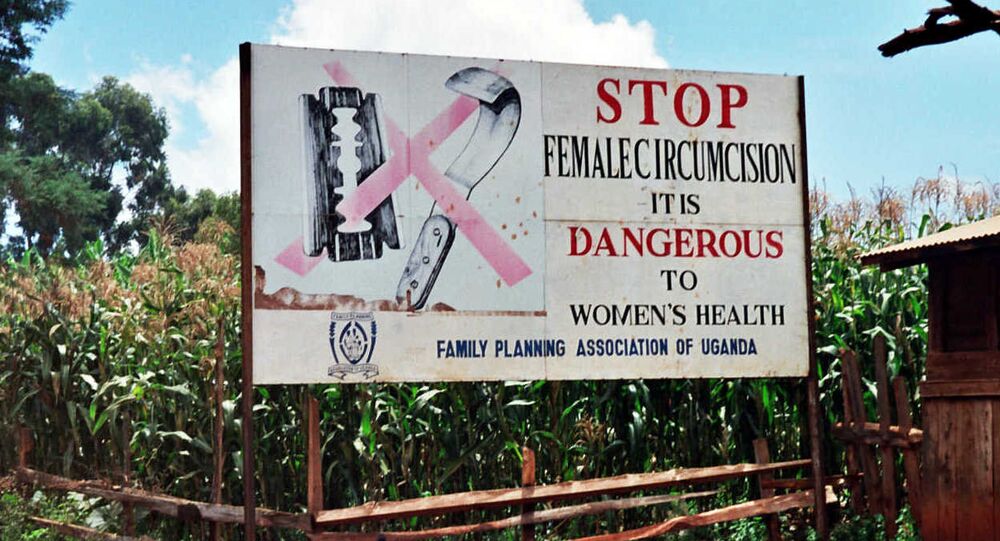 Sweden prides itself as a recognized champion of human rights. However, its recently imported cultural values from the developing world may eventually shatter Sweden's shining image. Tens of thousands of women have been found to be suffering from genital mutilation, despite the fact that this immensely painful procedure is illegal.

© AP Photo / Sergei Chuzavkov
For the Ladies: Sweden Spends Millions Rooting Out Gender Bias in Ukraine
The number of Swedish women who have undergone genital mutilation has been estimated to be at least several times higher than previously expected, a new survey has found.

In 2015, the National Board of Health estimated that there were approximately 38,000 women who have been victimized by female genital mutilation (FGM) in the Nordic country, which had for decades ranked at the top of various equality ratings.

The most recent survey, however, placed Sweden among the countries with the highest proportion of FGM sufferers, with a staggeringly morbid estimation of 150,000 in a nation of 10 million, Swedish Radio reported. Since genital mutilation is a very private and shame-laden, it remains largely unreported, with the actual number of victims potentially being still higher.

What makes matters worse, genital mutilation is being carried out among girls of immigrant descent in families that have been settled in Sweden for a long time. Despite the fact that FGM is strictly prohibited by Swedish law, tradition and religious prescriptions may sometimes overcome legal ramifications. In immigrant circles, girls are known to have been taken to their respective home countries to have this procedure performed.

"Women who come to our reception have big problems. We remove the damaged parts in the lower abdomen area. But there are many more affected women in our society today, women we have to discover and offer help," Bita Eshragi, a physician from Amelmottagningen, Sweden's only clinic for FGM victims, told SVT.

Female genital mutilation, which is also known as female genital cutting and female circumcision, is the ritual cutting or removal of some or all of the external female genitalia. The practice is found in parts of Africa, Asia and the Middle East and is mostly carried out for religious or spiritual reasons. According to a 2016 estimation by the United Nations Children's Fund (UNICEF), around 200 million women living today have undergone this procedure.

© CC0
Finns Fume Over Abduction, Forced Marriage, Gender Mutilation of Migrants
Depending on the country, FGM is carried out at various ages ranging from days after birth to puberty. The practice is rooted in ideals about women's chastity and purity, and failing to comply may result in social exclusion.

The exact amount of surgery (mostly carried out in field conditions) varies from country to country, yet typically includes the removal of both inner and outer labia and parts of the clitoris. Adverse health effects may include recurrent infections, difficulty urinating, chronic pain, infertility and complications during childbirth — with no known benefits whatsoever.