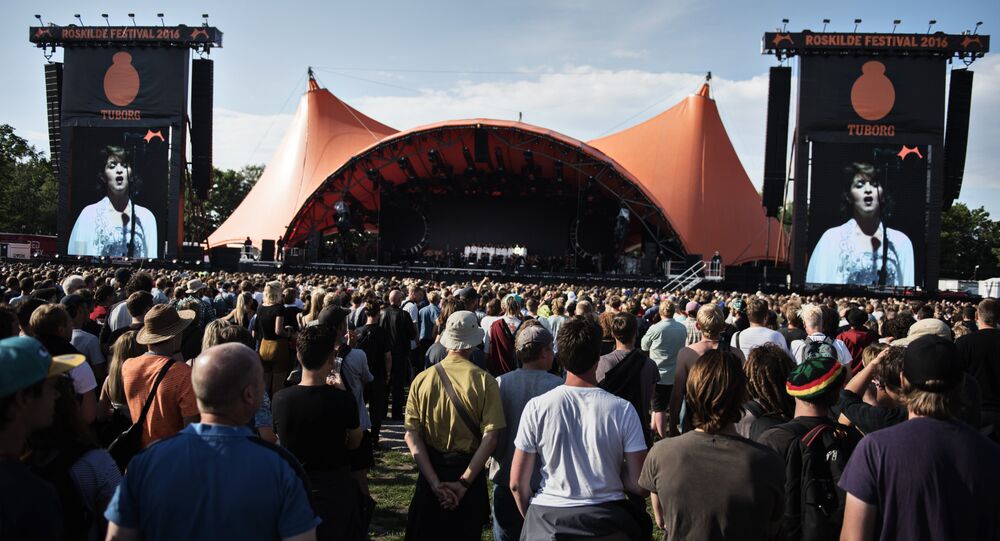 Last year, many Nordic festivals, particularly in Sweden, were tarnished by multiple instances of sex abuse and groping, which led to a massive public outcry. The recent spate of terrorist attacks across Europe has spurred the Nordic countries to tighten security rules at the upcoming summer festivals attracting tens of thousands of music lovers.

© AP Photo / Markus Schreiber
Swedish Authorities to Use Lions to Keep Terrorists Away From Stockholm's Streets
Following the deadly attacks in Manchester and London, Denmark decided to bolster security measures at several music festivals, such as Heartland Music Festival on the island of Funen, Distortion Street Party in Copenhagen and, most notably, Roskilde Festival, one of the largest of its kind in Europe.

While Distortion organizers compiled a byzantine risk assessment report and, by their own admission, "made a thorough" anti-terrorist effort, Roskilde organizers adopted a special security plan, featuring a number of innovations.

Already last year, the Danish Intelligence Agency started training volunteers at Roskilde Festival to raise their awareness of divergent and suspicious behavior. This year, festival guests will be safeguarded by concrete blocks against vehicular attacks.

Sometimes we all need a little help to get there. This is true Roskilde spirit #rf16 📸 Matias Altbach

"It is granted that our guests will experience some new initiatives this year. For our part, we have already done a lot of things behind the scenes, which the guests won't see," Morten Therkildsen told the Danish newspaper Ekstra Bladet.

Distortion founder and director Thomas Fleurquin told the Danish newspaper Politiken that it was "completely safe" to take part in the festival, yet provided an apt reservation.

"However, you must remember what a good security officer always says: the only 100 percent safe event is no event at all," Thomas Fleurquin said.

​In Sweden, the country's largest rock festival Sweden Rock, which is about to kick off, will be held amid enhanced security preparations. According to police spokeswoman Ewa-Gun Westford, police presence will be made more visible. However, she also ventured that simply adding resources is not a panacea, as smart distribution and appropriate measures are important.

Finland is also planning to attach greater weight to security arrangements than ever before, Finnish national broadcaster Yle reported.

"We are actively following the international events and have increased the resources used for safety," Tiina Salonen, program manager for Kotka Havsdagar, told Yle, stressing their preparedness to meet various types of threats. Among other things, the number of guards has been increased.

© AP Photo / Lehtikuva/Sari Gustafsson
Finns Dread Terrorist Attacks, Yet Trust Their Government to Prevent Them
Several cities, including Imatra, Savonlinna, Joensuu and Kouvola, have recently announced that they will put obstacles on pedestrian streets to prevent vehicular attacks.

"The use of vehicles as weapons has increased in the world, which is why a greater focus will be put to the traffic arrangements. Among other things, we are going to build obstacles in connection with events organized in Finland," senior police commissioner Vesa Pihajoki told Yle.

At the same time, she ventured that terrorist attacks in Finland nevertheless remain unlikely.

"Most likely dangers and risks associated with events in Finland are minor injuries, infections, violence caused by intoxicated persons and misdemeanors such as theft," Pihajoki said.