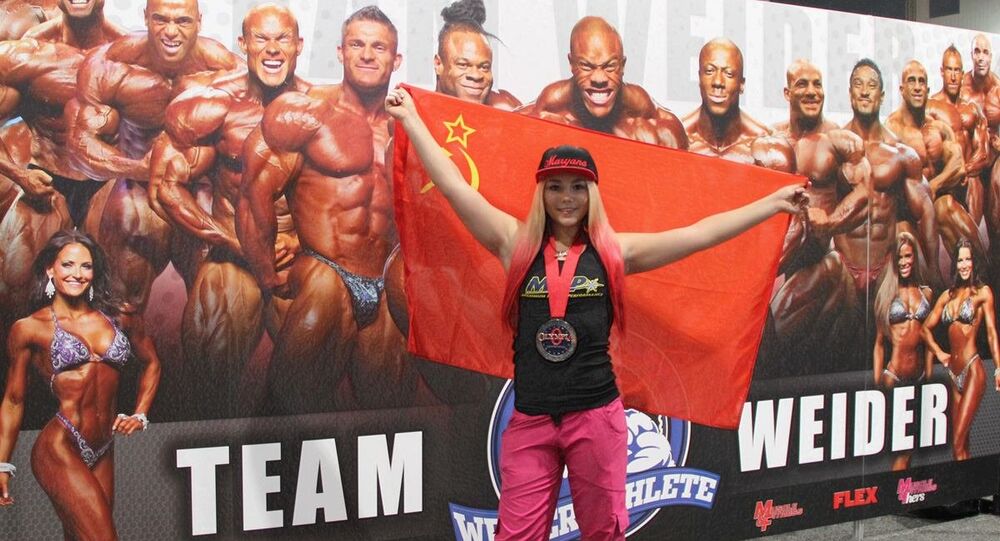 Maryana Naumova, the teenage Russian powerlifting champion who bench presses nearly 150 kilos and is often regarded as the world’s strongest girl, told Sputnik about her voyages to the restive Ukrainian region of Donbass, her political views and about her meeting with Arnold Schwarzenegger.

According to Naumova, she first met Schwarzenegger in 2013 at the Arnold Classic tournament where she also managed to set a new raw bench pressing record of 100 kilos at the age of 13.

"Of course I knew of Arnold – the ‘terminator’ and the top ‘hunk’ — since childhood. When I received an invitation to take part in the Arnold Classic in 2013… I knew it was my chance to meet Arnold, and it served as an additional stimulus for my training. I managed to meet Arnold prior to my performance and to talk to him. He was surprised when I told him that I intend to bench press a hundred (kilograms) and wished me luck. And when I asked him what I should do to become as successful as him, he laughed and said that one needs to work a lot – and that is exactly what I’m doing now. Arnold is a very important person in my life, he’s my motivator; a boy from a poor Austrian family who accomplished so much, he’s an example for me and for millions of people," Naumova said.

The teenage weightlifter also took a keen interest in the plight of the people of Donbass – she provides assistance with delivering humanitarian aid shipments to the restive Ukrainian region and has made several trips there to organize youth sports events.

"When I see the eyes of those children in Debaltsevo or Andreyevka and hear them say things like ‘no one ever visited us before’ or ‘Mariana, after talking to you I decided not to abandon sports, and maybe someday I can be like you’, I realize that I’ve found the meaning of my life. It’s really hard to describe," she confessed.

Naumova also refuses to consider communism an extinct ideology. A staunch adherent and member of Russia’s Communist Party, she firmly believes that the teachings of Marx and Lenin deserve another chance.

"To me, communism, first and foremost, equals justice. I cannot say that I studied it extensively – one needs to read a lot of books in order to do so, which is something that I’ve yet to accomplish. But I do know that in the Soviet Union people enjoyed considerable social protection. Any kid from Siberia, if he wanted it, could apply to any university without having to pay bribes. But now society is divided into classes: there are the rich who can afford almost anything, and there are ordinary people who’re limited to living in small apartments, eating low-quality food bought in chain stores and working all day long in order to survive and feed their children. I believe that this is unjust, and this is why I’m a member of the Komsomol," she declared.

Naumova also added that she does not intend to become a professional athlete, instead seeking to focus her efforts on public service and politics.

'The Terrorists Got Kicked Out': World's Strongest Girl Takes Tour to Syria