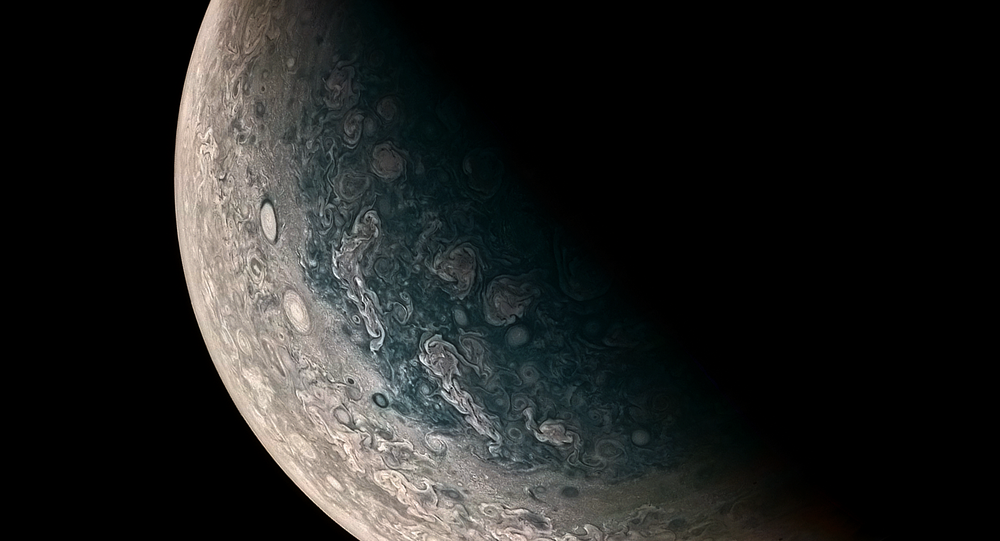 NASA's Juno mission to Jupiter has captured the Earth-size cyclones on the both poles of the planet, giving new opportunities to scientists to examine the gas giant.

WASHINGTON (Sputnik) — The Juno spacecraft’s initial close encounter with the planet Jupiter shows densely clustered swirling storms atop both poles and a planet with a magnetic field much larger than expected, the US National Aeronautics and Space Administration (NASA) said in a press release on Thursday.

​"We knew, going in, that Jupiter would throw us some curves," Juno principal investigator from the Southwest Research Institute Scott Bolton stated in the release. "But now…there is so much going on here that we didn’t expect that we have had to take a step back and begin to rethink of this as a whole new Jupiter."

© AP Photo / ESA/Hubble
Not So Great Anymore: Jupiter’s Red Spot Shrinks to Smallest Size Ever
Bolton explained that the appearance of Earth-size cyclones at the planet’s north and south poles has left scientists groping for an explanation.

"We're questioning whether this is a dynamic system, and are we seeing just one stage, and over the next year, we're going to watch it disappear, or is this a stable configuration and these storms are circulating around one another?" Bolton noted.

Measurements of the massive planet’s magnetosphere indicate that Jupiter’s magnetic field is stronger than expected, more irregular in shape and about 10 times stronger than Earth’s, according to the release.

© NASA . Jason Major
‘Great Cold Spot’ Twice the Size of Mars Found on Jupiter
Juno was launched on August 5, 2011 and entered Jupiter’s orbit on July 4, 2016. A large elliptical orbit allows the craft to make a close pass over the poles every 53 days.

The next pass will take Juno over the planet’s red spot, the release explained. The feature that has baffled scientists since the telescope was first invented.

Jupiter, the largest and oldest planet in the Solar System consists of a giant ball of gas held in place by gravity. Scientist hope the mission will reveal clues on how planets with solid land masses, such as Earth, were created.