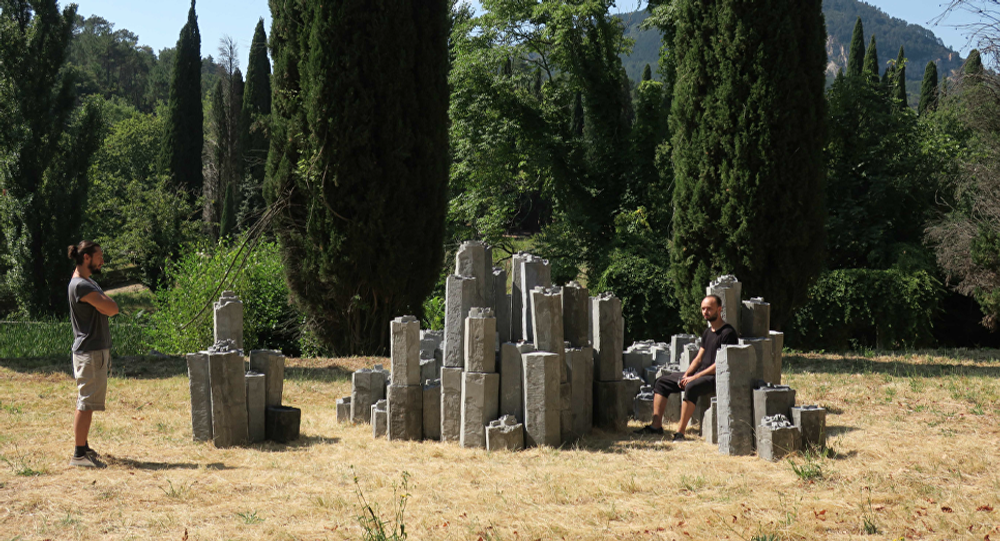 Andrei Blokhin and Georgy Kuznetsov, a duo of modern artists from the Russian city of Krasnodar known as Recycle Group, represented Russia at the 57th Venice Biennale, the most famous and prestigious international art exhibition, which opened on May 13, 2017. Their project called Blocked Content became part of the Russian Pavilion at the event.

© Photo : copylab instagram
US Blogger Makes Extraordinary Mash Ups of High Fashion and Classic Art (PHOTOS)
One of the participants of the young and successful duo, Andrei Blokhin, told Sputnik about the idea of their project and explained how modern technologies like 3D-printing and smartphone apps are involved in contemporary art.

"We did our very first joint project in 2008. The exhibition was called ‘Recycle' because in our creations we used materials that can be recycled. Over time, this name became even more meaningful to us: we take some ideas and then transform them, reconsider, ‘recycle' them. And we still continue to use recyclable materials in our work," Andrei explained.

© Photo : Courtesy of the Pavilion of Russia, Venice
Recycle Group
© Sputnik / Ruslan Krivobok
Dirty Art: Russian Freestyle Artist Paints Masterpieces on Dirty Cars (PHOTOS)
Soon, their creations could be seen exhibited in various galleries in Moscow. In 2012, the team made their way into art galleries in London, Paris and New York.

At first, their works featured only in group exhibitions. But in no time they reached the next level: their first "solo" project was put on in Paris.

"Our work has been already exhibited at the Venice Biennale several times, in 2011 and 2013. Our previous Biennale project was made in St. Antoninus Church, a baroque church with its own ideas of architecture and space. The main theme of ​​our exhibition was associated with religion," the artist said.

Now, the duo lives mostly on airplanes — the artists have to travel a lot for their work. They own two studios, one in France and another in their motherland, in Krasnodar — that's where they worked on an exhibition called Blocked Content — created for the 2017 Venice Biennale's Russian Pavilion.

"Technology has always been involved with art. And we are always experimenting with it too. In this exhibition, we use the latest technology, such as 3D-printing and a special application for smartphones that allows seeing an augmented reality," Blokhin revealed.

"We created sketches, then transformed them into 3D-models, after that we printed fragments from a 3D-printer and only then put them together and painted," he added.

That was the first time they used 3D-printers in their work — and they spent a whole week to find out how they work and how to customize them. "In addition, we used an application that allows seeing our sculptures with a ‘thermal scope' effect," the Russian artist said.

© Photo : smartify.org.uk
OK, Gauguin! New Smartphone Art App Aims to Revolutionize Museum Guides
This application "extends" the reality not only at the Recycle Group's exhibition but also across the city — there are eight spots across Venice, where people can use this program and see what others cannot see.

"This application gives us a new space for action, another dimension. We like the feeling of freedom this virtual space gives us," Blokhin explained.