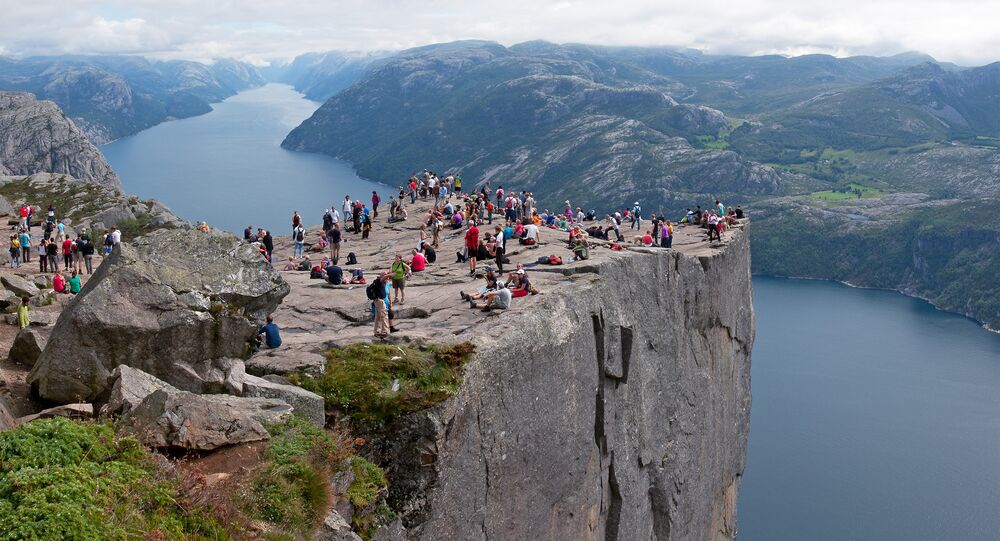 A non-descript hamlet in Norway has been flooded by hundreds of tourists due to an error in Google Maps. Instead of seeing one of the Nordic country's premier sights, visitors end up at a small farm.

© Flickr / alexanderTIEDEMANN
A View to Die for: Thoughtless Selfie-Tourists Distress Norwegian Rescuers
Preikestolen or the Pulpit Rock is one of Norway's best known attractions and a magnet for tourists. Towering an impressive 604 meters over the Lysefjord, the Pulpit Rock has been consistently named as one of the world's most scenic views by, among others, CNN Go and Lonely Planet.

An annoying blunder by Google Maps, however, has resulted in hundreds of tourists being sent on a winding detour that ends in the tiny village of Fossmork situated on the other side of the fjord. Although the famous cliff is perfectly visible from the village, it is nevertheless 30 kilometers away from the path that leads to the picturesque selfie-friendly summit.

"We have sent hundreds of tourists back with the message that they are on the wrong side of the fjord. During the summer season, 10 to 15 cars can come driving every day," Fossmork local Helge Fossmark told the Norwegian daily Stavanger Aftenblad.

​Fossmark, who runs a small farm in Fossmork, said that minibuses are almost queuing for the village on busy summer days, regardless of the fact that the newspaper described the road as "terribly bad." Fossmark's neighbor Gunnar Bø also admitted to receiving his fair share of lost and confused tourists.

"When we are in the cottage, there are two, three, four, five or six tourists arriving. Every day. They say they are heading to the Pulpit rock and don't understand anything. Google Maps sends them across Lysefjord Bridge and into Fossmork. The road here is quite narrow and they become nervous when we tell them to turn around and drive back. We lend them binoculars to watch those who are already up at the Preikestolen. We get to talk to the Chinese and Japanese, and there was once an American who wanted to buy the cabin. He thought the place was so amazing," said Bø.

"I believe we should get something that shows people the right way to the attraction. A sign does not necessarily solve the problem. People trust Google more," Roy Jarle Johansen told the Norwegian daily Verdens Gang.

Google said that it appreciated feedback that enables it to improve its service.

"We are constantly working to improve Google Maps, and encourage people to report any problems they find, so that we can make sure we resolve the issue as soon as possible," Helle Skjervold of Google Norway told Aftenposten via email.

On the edge of #Preikestolen #Norway pic.twitter.com/KhBgw2xuSy

​The Pulpit Rock is located in the municipality of Forsand in Rogaland county, Norway. Atop the cliff, there is an almost flat top of approximately 25 square meters. In recent years, hundreds of thousands of tourists and base jumpers have visited the rock, making it one of the most visited attractions in Norway. At present, it is only accessible via an almost four-kilometer hike, which is why the local authorities are pondering ways of improving its accessibility.