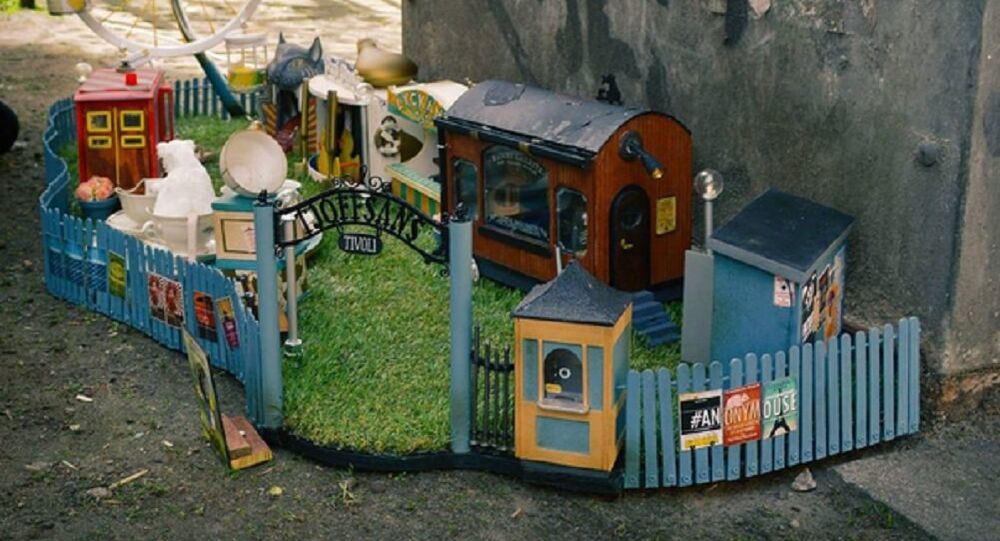 In late 2016, a mouse-sized "shop" and "restaurant" that popped up in the Swedish city of Malmö without further explanation made international headlines, only to be destroyed several weeks later. Recently, the artists behind the minuscule sights came back with an amusement park of the same murine size.

Even before Malmö's "mouse quarter" was vandalized, the artists (who go by the moniker of Anonymouse) claimed themselves to be working on "the next thing" to be introduced in 2017. Apparently, the right time has now arrived. Last Sunday, Anonymouse opened the doors to an ankle-high amusement park, which they claimed to "welcome visitors of all ages."

Despite its tiny size, the "amousement" park named Tjoffsan's Tivoli after a character in a novel by Astrid Lindgren, arguably Sweden's most famous children's author, features a full range of attractions.

The miniature amusement park on Södra Förstadsgatan is as detailed as its predecessors and features a cat-shaped scary ride, a fortune teller named Madame Raclette (named after a sort of Swiss cheese), a side stall named Lucky Cheese, a tiny popcorn stand and mouse-sized portable toilets.

The new rides attracted quite a crowd (although few if any of Malmö's four-legged residents), which spurred Anonymouse into continuing their spate of mouse-themed puns.

Do you remember Il Topolino, the mouse restaurant in Malmö? A tiny circus just opened up for more mice-friendly fun in town. #anonymouse pic.twitter.com/vUVlQLBlUn

"The opening of the Amousement park was met with some excitement by slightly larger visitors than expected. We apologize for the lack of personnel at certain hours, the management are working on a solution. Thank you for your interest and Cheese out!" Anonymouse wrote on Instagram.

While the anonymous mouse-lovers' previous antics went viral and brought them international fame, the mouse enthusiasts did not believe the fairground's popularity would match that of the former "mouse quarter."

"We don't think anything we'll do will ever get the same level of attention as the installation on Bergsgatan. It was literally featured around the world. However, so far the reception has been great, so we're not worried," Anonymouse told the Swedish news outlet The Local.

In late 2016, the mouse shop and restaurant were opened on Malmö's major road Bergsgatan by unknown mouse enthusiasts. The former was called Noix de Vie (French for "Nuts of Life") and offered an assortment of nuts for local mice, whereas the latter bore the name of Il Topolino (Italian for "Mickey Mouse") and "sold" cheese and crackers to its rodent clientele. After less than three weeks in action, during which the eatery was actually visited by a living mouse, the premises were vandalized beyond recognition.

For Your Paws Only: 'Anonymouse' Creates Tiny Shop for Mice in Sweden