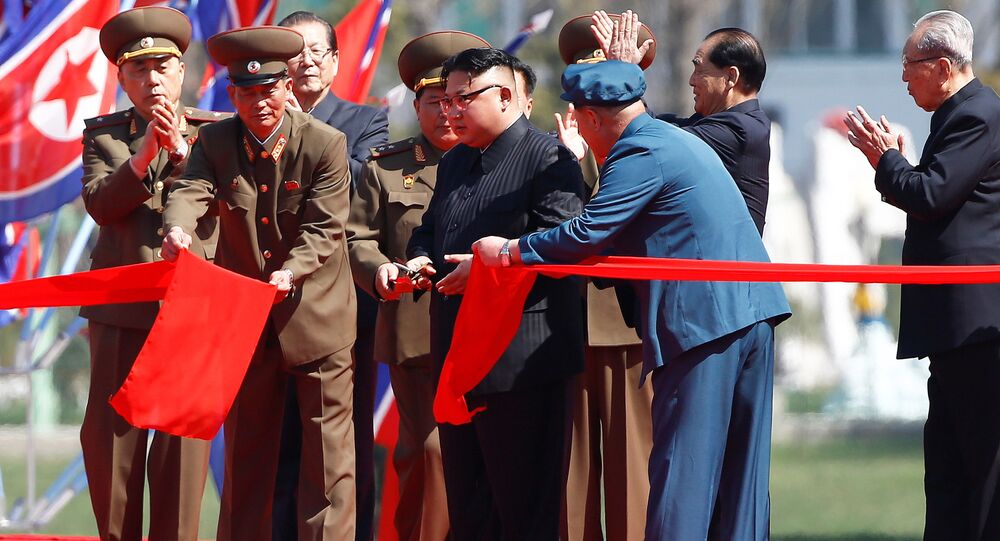 In many countries, you can't just walk down the street and meet the head of state. But North Korea is quite an exception.

© REUTERS / KCNA
N Korea Vows to Launch 'Preemptive Strike' on US Military Bases in Japan, S Korea, US Aircraft Carrier
Local residents often have an opportunity to see the head of their state personally. The country's leader, Kim Jong-un, regularly takes part in various events throughout the country.

Last Thursday, Kim Jong-un opened a new micro district in Pyongyang, called Ryomyong (which can be translated from Korean as "the dawn"). Tens of thousands of people gathered to see the event.

"The streets were full of well-dressed people, preparing for the celebration. Their number grew until they almost completely covered the wide avenues of the North Korean capital," Sputnik Korean wrote.

According to Sputnik's correspondent, crowds of people were moving on the streets in an organized manner — servicemen, students, party workers, builders, ordinary workers and scientists, for whom the new micro district has been built.

"The North Korean leader appeared quickly and with flair, and also quickly disappeared, after cutting the coveted red ribbon and not dropping a word to the public. However, tens of thousands of people who gathered there to watch the ceremony were hardly disappointed," Sputnik Korean noted.

© REUTERS / KCNA
US Prepared to Strike North Korea if Missile Test Appears Imminent
As was earlier said by North Korea's Prime Minister Pak Ponzhu, the country's efforts on the construction of modern neighborhoods are almost comparable with North Korea's extensive activities in the nuclear field.

North Korea declared itself a nuclear power in 2005. The United States, Japan and South Korea, as well as Russia and China, took part in talks with Pyongyang between 2003 and 2009 on denuclearizing the Korean peninsula, but North Korea withdrew from the talks.