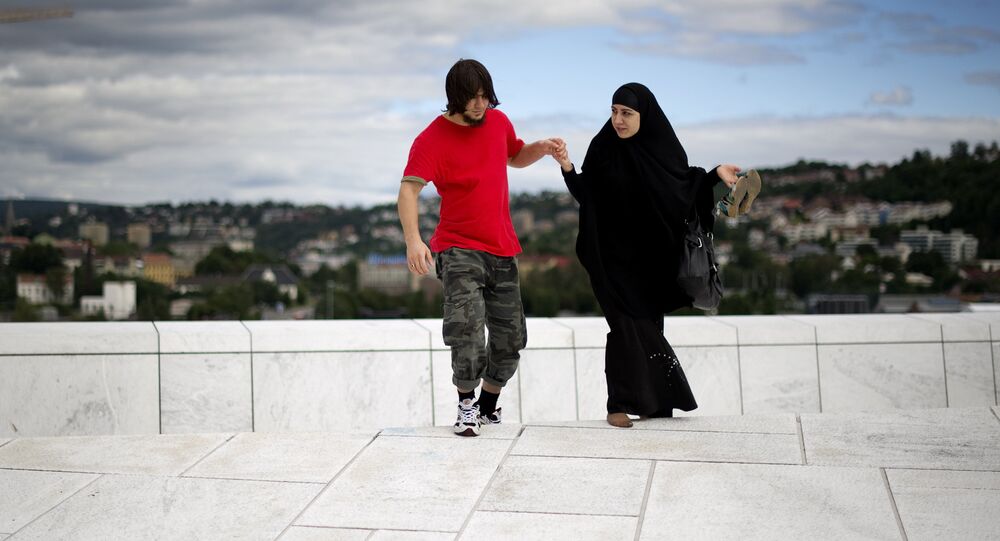 In the follow-up to the EU Court's much-debated decision to allow the prohibition of religious symbols, the idea of banning hijabs and other Muslim garment seems to be catching a second wind. A Norwegian politician moved to ban Oslo municipality employees from wearing headscarves.

© Photo : Svalbardi.com
Norway Entices Muslims With 'Premium Water' From Pristine Arctic Archipelago
Remarkably, the idea to ban religious symbols, such as the hijab, from Oslo Municipality was put forward by Carl Hagen, former leader of the Progress Party, which has been advocating hijab bans on various levels for the past decade. By his own admission, Hagen would like to utilize the recent EU Court ruling as a basis to ban all municipal employees from wearing political, religious of philosophical symbols at work, NRK reported.

Hagens' colleague and Progress Party labor spokesman Erlend Wiborg went even further in advocating a change in the Norwegian legislation to give employers carte blanche to ban hijabs, which he refused to call "discriminatory."

"Norwegian employers should be entitled to prohibit the hijab and other religious garments in the workplace. I will take the initiative to amend the law so that Norwegian employers enjoy this right," Erlend Wiborg told Norwegian national broadcaster NRK. "When at work, one represents their employer, not themselves," Wiborg argued.

As of today, Norwegian employers can make demands on how their employees dress during working hours, barring religious headgear.

© Flickr / Kristaps Bergfelds
Multiculturalism 2.0: Denmark to Get First Muslim PM Only Decades From Now
However, Hagen's attempt, which is yet another attempt by the Progress Party to rid the Norwegian nation of unwanted religious garments, is most likely doomed, like its numerous predecessors, even despite the fact that the Progress Party is part of the ruling coalition.

This time, the reason is that the opposition Labor Party that holds majority in Oslo Municipality is against a comprehensive ban on religious symbols as such.

"With our current majority, it seems unlikely that Hagen's motion will get him anywhere," Councillor Tone Tellevik Dahl told Norwegian newspaper Verdens Gang.

Labor Party gender equality and anti-discrimination ombudsperson Hanne Bjurstrøm argued that religious headwear is strongly protected and that many have misconceived the ruling as a green light to banning the hijab and other headdresses. According to Bjurstrøm, the EU Court has left a lot of discretion to national courts to decide how far a country may go.

© AP Photo / B.K. Bangash
Hijab-Denying Norwegian Nursing Home Under Fire Amid Fervent National Debate
Although the percentage of Muslims in Norway remains fairly small compared to other European nations (and according to various estimates is peaking at 3.8 percent of the Norwegian population), the Nordic country has experienced several hijab-related disputes before.

Last fall, the Blidensol nursing home in the city of Stavanger came under fire from the Equality Ombudsman for banning their employees from wearing hijabs, turbans or Palestinian headscarves, with the city council threatening to cancel the operating agreement with the nursing home. However, Blidensol board spokesman Thomas Middelthon advocated that the EU verdict actually allowed authorities and employers to ban hijabs.

In September 2016, Norway saw its first ever trial over the Islamic head garment, after hairdresser Merete Hodne notoriously refused to serve hijab-clad client Malika Bayan. Fourty-seven-year-old Merete Hodne, who was fined 10,000 NOK ($1,075) for religious discrimination and dubbed "Nazi coiffeur" by the Norwegian press, previously ventured that the hijab was a symbol of the "evil" Islamic ideology, just like the swastika was that of Nazism.

​In February 2017, Malika Faviano (previously known as Bayan), whose name for many Norwegians became synonymous with asserting one's religious rights, shocked her fellow Muslims by notoriously discarding the garment, over which she had previously gone to court. Faviano claimed herself to put away the hijab due to "personal changes in her life," whereupon she started to receive offensive, aggressive and even sexist commentaries from angry Muslims, NRK reported.