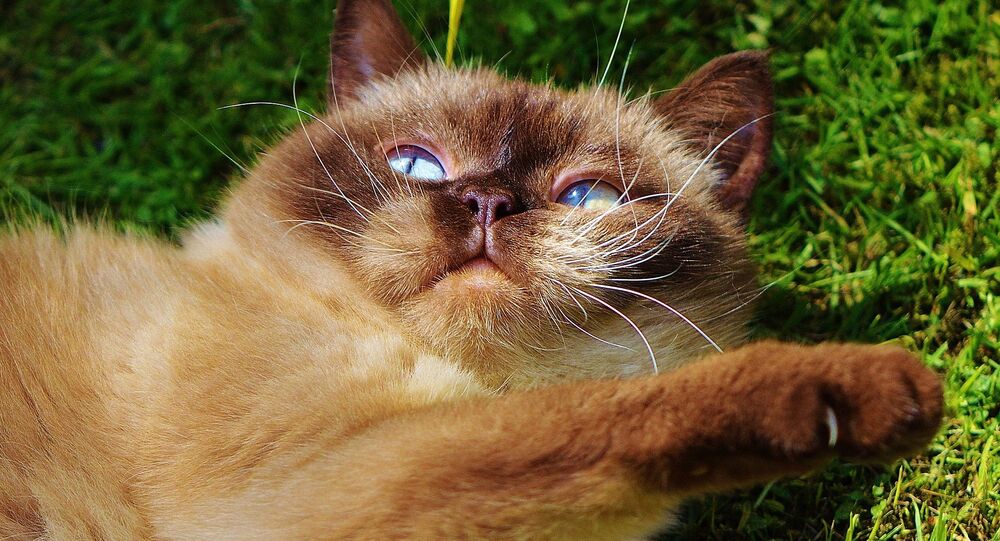 Black 'Meowket': It's Not Just Catnip That Gets Felines High

Many cats can't get enough of catnip - nepeta cataria, a fragrant plant native to Asia - although why it has such an effect on felines has hitherto remained a mystery. However, fresh research might have shed light on the narcotic riddle, as well as identified several new alternative substances for cats who fancy something a little stronger.

Cats get buzzed from catnip when they catch the scent of nepetalactone, the active ingredient in nepeta cataria. It's a terpene — an aromatic compound in the same chemical family as the elements that lend marijuana its indubitable, funky aroma. The chemistry behind feline affinity for the scent was identified in the 1940s, although it remains unclear which genes make cats start rolling and pawing like festival goers when they indulge in a thorough whiff of the green stuff.

Sprayed catnip on my fingers to try and befriend some stubborn cats. It's working surprisingly well. pic.twitter.com/Po1j1JBHVU

It's not merely cats that are mesmerized by catnip — humans evidently dig it too, as videos depicting moggies in throes of ecstacy after indulging in a thorough whiff of the green stuff have notched up millions of views on YouTube.

Scientists are interested in determining the genetic reasoning behind the habituation, however, as catnip seemingly doesn't serve a perceptible genetic purpose. Neither food nor behavioral stimulant, catnip is a mere recreational narcotic — cat drugs.

Got anymore of that catnip? pic.twitter.com/I1dQE0UtBy

Even more curiously, not all cats are susceptible to catnip — some species of cats big and small aren't affected one iota, while others experience only mild effects. A new study conducted by researchers at UC Davis, which tested the effects of catnip on 100 different cats, has attempted to resolve these questions once and for all.

Wonderful news for cats who don't like catnip! https://t.co/7DFf0dqZWc #bmcvetres

Along the way, the team, led by renowned moggy guru Dr. Tony Buffington, also identified some alternatives for catnip straightedgers — silver vine, Tatarian honeysuckle and valerian root also have psychoactive properties when imbibed by cats. Of the plants, catnip was the only one to contain nepetalactone; the other plants have similar molecules, so there's evidently some variation in the sensitivity of cats' neuronal receptors.

In all, 80 percent of test subjects reaped a buzz from silver vine (a higher response rate than catnip, which got less than 70 percent high), with valerian root and honeysuckle making around 40 percent blotto.

Some cats that didn't react to one stimulant would to another, although only 23 percent responded to all four — and six percent were impervious to the entire quartet. Moreover, some cats wouldn't respond in certain environmental conditions — when they felt threatened, or while music played — but would when those circumstances changed.

The catnip alternatives also got big cats stoned — the experiment was partially repeated on tigers and bobcats, with the former, a famed teetotaller in the cat family, unfazed by all four. Bobcats rolled around like euphoric kittens when presented with the silver vine, but weren't even made tipsy by the other three.

Still, the study's findings don't definitively conclude why some felines respond to catnip in such a manner. There was no correlation between age, sex, or even personality types and catnip susceptibility. Dr. Buffington was particularly surprized that shy cats got just as wasted as bolder, more affectionate cats given the chance.

Nonetheless, the discovery does offer some hope to house cats — felines that, for one reason or another, spend most of their lives indoors. Dr. Buffington believes catnip and/or its alternatives could be used to enrich the lives of confined feline. If a house cat spends a significant proportion of the day alone, having the option to spend a few hours blissed out might enliven things, and have a positive health impact, given cats that are left alone with little stimulation are at a greater risk for obesity.