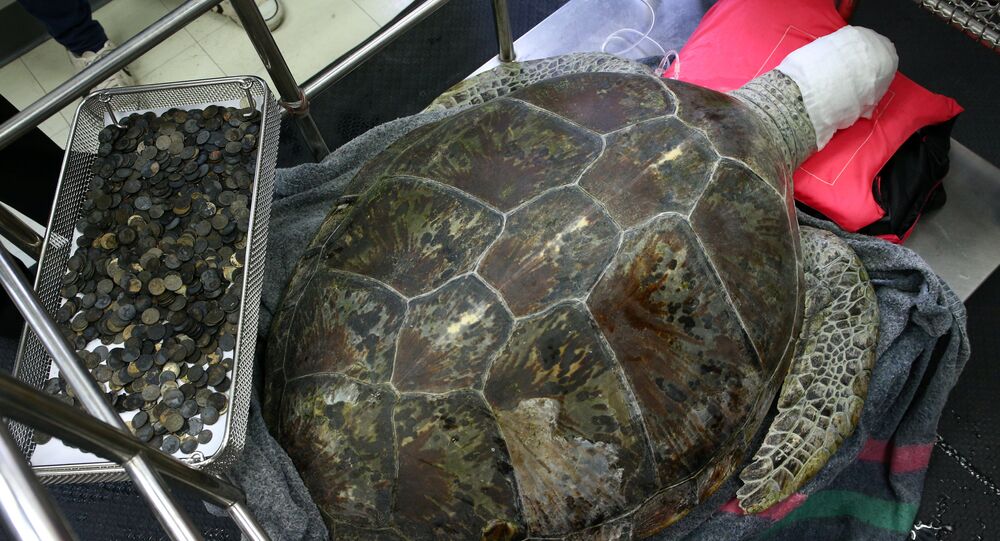 A 25-year-old sea turtle that swallowed nearly 1,000 coins, chucked by visitors into her pond in Chonburi province of Thailand in a luck ritual, has died.

Piggy-Bank or "Om Sin" the green turtle passed away on March 21 after complications from surgery to remove nearly five kilograms of coins she swallowed during captivity in a public pond, about 110 miles (175km) south-east of Bangkok.

Vets who performed the procedure at Bangkok's Chulalongkorn University earlier in March said the reptile died from blood poisoning caused by consuming loose change over the years.

In an emotional press conference, vet Nantarika Chansue, who operated on Piggy Bank and tended to her recovery, announced the turtle's death and said they had planned to release her back into wild.

"We had plans to release her into the wild at Sattahip on Thursday," she said.

"She at least had the chance to swim freely and eat happily before she passed."

Chansue had scathing words for the tradition of chucking coins into the pond for luck which ultimately led to the turtle's death.

"I felt angry that humans, whether or not they meant to do it or if they did it without thinking, had caused harm to this turtle," she said.

"I want society to stop using our beliefs to harm animals. Animals should have a chance at a natural life."

The vet also slammed authorities for placing the turtle in the small artificial pond, which she believed affected her intake of essential nutrients such as fish and caused the animal to become depressed as it was devoid of toys and decorations.

"This led to Piggy Bank being bored and, eventually, depressed," Nantarika said.

Piggy Bank, a green turtle, hit the headlines after a four hour operation to remove the coins, that was thought to have been successful, took place.

Vets had to make a 10cm incision and remove most of the coins one by one although many of them had corroded or partially dissolved.

Piggy Bank was brought to the vets by the navy, which found her in a distressed state in her seaside hometown.

A green sea turtle has a lifespan of about 80 years. It is listed as an endangered species by the International Union for Conservation of Nature.

Impossible is Nothing: Turtle Challenges Rabbit for a Sprint