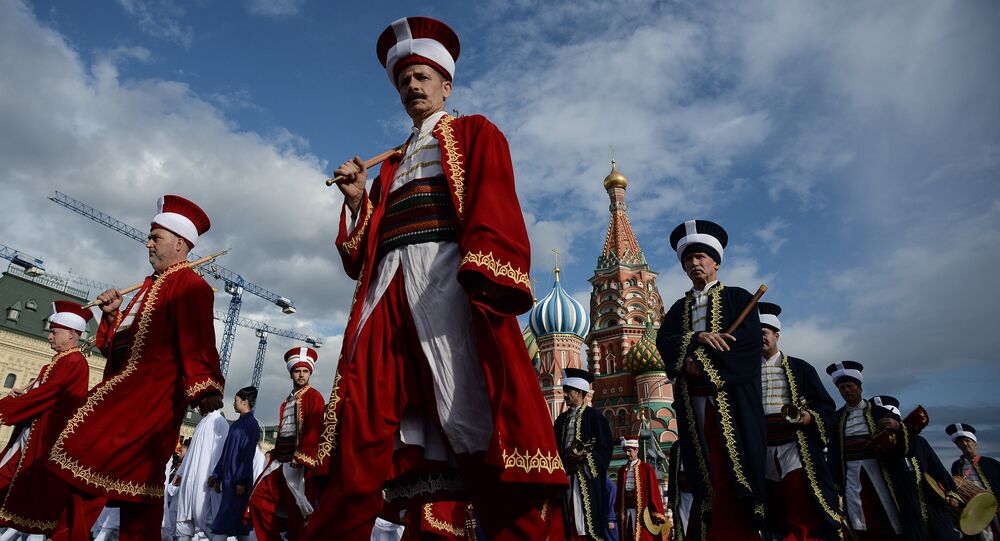 A Turkish Janissary band seeks to pay tribute to members of the Alexandrov Ensemble killed during a plane crash last December, who were en route to Syria to perform a holiday show for Russian servicemen assisting in the fight against terrorism.

Kadir Akçaalan, founder of the Ottoman Janissary band ‘Mehter’, explained that this summer they intend to start practicing several pieces from the Alexandrov Ensemble’s repertoire.

As he explained during his interview with Sputnik Turkiye, the band intends to perform these pieces to pay tribute to the members of the Alexandrov Ensemble who were killed during a plane crash on December 25, 2016.

Akçaalan also added that if Mehter is invited to participate in the upcoming 2017 Spasskaya Tower military music festival, then “it would be a great honor to pay respects to our dear friends from the Ensemble in Russia, their home country.”

As Akçaalan explained, the band hasn’t yet received an official invitation to the festival but will definitely accept one if the offer is made.

“After last year’s tragic plane crash, participating in the festival would hold an even greater meaning for our band, giving us a chance to pay our respects to the members of Alexandrov Ensemble and its head Valery Khalilov who were killed in the crash… We would be delighted to visit Russia and to pay our respects to our friends from the Ensemble in their home country,” he said.

It should be noted that the Mehter Janissary Band had already participated in the Spasskaya Tower festival in 2014, only two years after the band itself was founded.

"We were pleasantly surprised and touched by the genuine interest towards us shown by Russian audience and officials alike. We’ve toured many countries by now, but we’ve never experienced such joy and interest like what we felt at that festival in Russia," Akçaalan said.

Speaking about his experience during the 2014 festival, he also remarked that the Spasskaya Tower fest is not just a martial music event, but that it also helps bring together different cultures, creating a unique sense of camaraderie between the participants.

"When we were performing our country’s musical compositions, other participants were joining us and vice versa. The limitless world of art brought us together. The festival gave representatives of various nations a chance to meet each other," Akçaalan declared.

The Spasskaya Tower festival is an annual music fiesta staged in front of the historic fortified complex in the heart of Moscow. For a week Moscow’s Red Square will be transformed into a stage for some of the world’s best military and classical musicians performing live for an audience of thousands near the Kremlin’s iconic Spasskaya Tower.

Over 1,500 performers from 40 countries have taken part in the festival since it was launched 10 years ago.