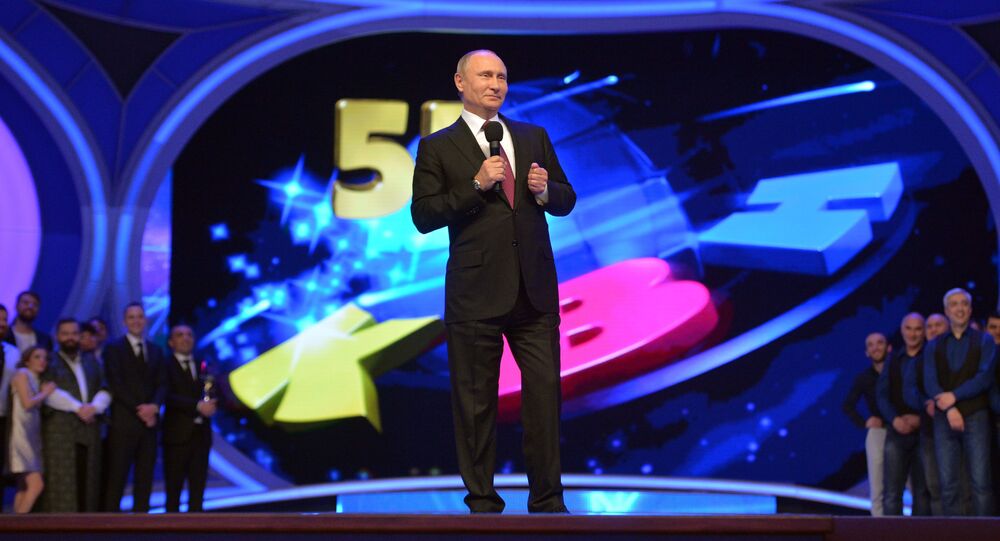 On Wednesday, the Riga-based NATO Strategic Communications Center of Excellence (StratCom COE) published a massive academic-style report about the Russian state's supposed use of comedy as a 'tool for strategic communication' meant to support Kremlin policies. Unfortunately, obscure language and long-windedness aside, the report has little to do with actual academia, or reality, for that matter.

© Photo : kremlin.ru
Comedy Gold: NATO Pans Russian Humor Contest as Nefarious Kremlin Tool
For instance, the report seems to suggest that in Russia, there is little practical use for comedy and humor on the national level except to "legitimize the regime," delegitimize foreign leaders," frame Western and American values, and otherwise cause trouble for other countries.

Among the groups targeted by the report is KVN, a long-running Russian comedy program and national competition featuring a mix of prepared sketches and improv comedy routines.  KVN, the report says, is "a fundamental part of the eco-system of Russian humor (in Russian culture)," and "a phenomenon, having extended beyond being a TV show," stretching down to the level of local competitions in schools. The report accuses KVN creator Alexander Maslyakov of having a "special relationship with the Kremlin," with his powerful platform serving as a "ready-to-act tool of strategic political communication."

Being comedians, KVN players and those associated with the show couldn't hide their amusement over StratCom's ridiculous claims. Evgeni Chukarov, a member of the Moscow-based comedy troupe Parapaparam jokingly declared that "it's a shame that our cover has been blown." The comedian noted that his troupe's popularity has only skyrocketed as a result of the report, adding that he and his team couldn't have dreamt of hearing such accusations even in their wildest dreams.

Parapaparam team captain Ivan Abramov, meanwhile, called the NATO report "childish," adding that it does not even deserve comment. "My comment is the following: friendship and common sense will prevail in the end," he added.

Uralskie Pelmeny ('Ural Dumplings') KVN team member Andrei Rozhkov suggested the report was so unbelievable that he thought it resembled an elaborate hoax. "This looks like a hoax; it's funny to me. Such things must be dealt with with humor. This is just too over the top," he said.

For his part, Sangadzhi Tarbaev, captain of KVN Team RUDN, representing Moscow's People's Friendship University, pointed out that "for a Russian-speaking audience, [such accusations] of course seem delirious." At the same time though, "for people who don't understand Russian reality or our television, this may seem quite real. Especially if some KVN performances were translated into English and commented on in the 'proper' way."

© REUTERS / Ints Kalnins
'Stop These Madmen': Germans Blast NATO Muscle-Flexing in the Baltics
Tarbaev noted that even if KVN were seen as a political tool, it would absurd to suggest that it was something used for some secret or devious purpose by shadowy Kremlin forces. After all, he recalled, the program was first developed back in Soviet days, and actually had a very complicated relationship with the state due to its biting satire. As StratCom's own report admits, KVN was actually banned on Soviet central television through the 1970s for its jokes on taboo topics.

Valdis Pelsh, a KVN jury member, even joked that he was glad that KVN is so popular among NATO staff, and advised them to watch the show with their families. "We read the report. We had a laugh," he added.

Asked to comment on this latest NATO storm in a teacup over Russian influence operations, Yuli Gusman, permanent KVN jury member and creator of the Nika Award (Russia's equivalent to the Oscars), told Sputnik that it was actually "great honor" to see KVN on the "front lines" of the political current, even if the report itself is absurd.

© Sputnik / Natalia Seliverstova
Russia-US Relations: What Could Be Done to 'Restore Mutual Trust'
In fact, he suggested, "if one sees everything useful, good, interesting, and outstanding as a 'weapon of influence', PR or some kind of scheme that helps the country, then yes," KVN can be seen as a 'weapon'. Then again, so too can the Bolshoi Theater, "just as Broadway and Hollywood are American 'weapons'."

"Except perhaps it would be better to use not the term 'weapon', but as it was defined earlier: as a tool of friendship between peoples," Gusman added. International exchanges – whether in art, theater, or even comedy, are a good thing, he stressed.

As for KVN's supposed political uses, Gusman stressed that "the fact that KVN criticizes and laughs at our leaders, and at their leaders, at a lot of things – this is a tradition that goes back 56 years! And for all these years it was never imagined that KVN was invented by NATO…"

Gusman suggested that even if KVN were seen as some kind of information weapon, "one should rejoice and even pray that this was the only kind of 'weapon' that countries had – rather than saber-rattling with missiles, throwing bombs, making threats about nuclear dust or weaponized lasers; so that this 'war' would be fought based on who can dance better, sing better, draw, whose youth is more knowledgeable or witty."

Ultimately, it's anyone's guess what NATO's paranoid analysts are going to cook up next. One thing is clear, however, and that is that KVN is going to have a lot of new material for the upcoming season.

They Cry, Too: Six Occasions When World Leaders Gave In to Their Emotions