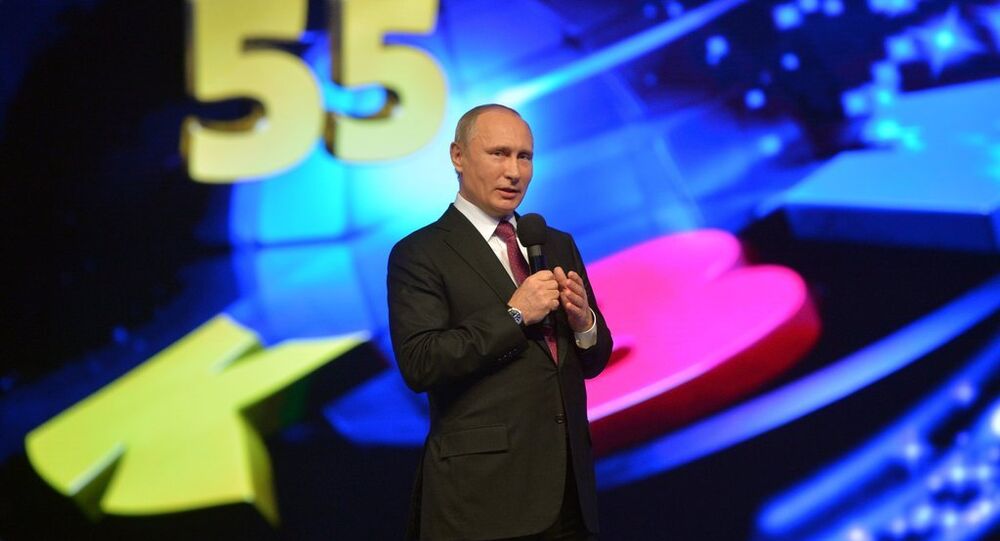 Those evil Russians: they can turn anything into a weapon. At least, that’s what the Latvia-based NATO Strategic Communications Center of Excellence (Stratcom) outlined in a recent publication that slammed a popular Russian humor TV program as a “tool of strategic communication.”

© AP Photo / AFI, Reinis Traidas
Baltic Bastion: Latvia Building 171-Mile Fence on Border With Russia
Those clever Russkies. They purportedly use natural gas pipelines to divide the EU; they use Sputnik and RT to instill fear like Daesh can't. And when they can't weaponize the ordinary and everyday, they call in those hackers no one can seem to catch.

If you aren't scared yet, get this: the Kremlin has managed to turn comedy into a weapon of mass communication. At least, that's more or less what a recent Stratcom study says.

"Stratcom laughs: in search of an analytical framework," published today, is described by the authors as a "multidisciplinary effort to design an analytical framework for analyzing humor in scenarios where researchers and practitioners find themselves working through large data collections where humor has been used as a potent tool in the construction of messages designed for strategic communication." The study focuses on three case studies: late-night shows broadcast by Russian TV; the international humor contest KVN, held annually since 1970; and "the application of humor as a tool of counter-propaganda by the Ukrainian media."

According to the study, Alexander Maslyakov, the creator of KVN — the humor contest and festival that was established back in 1970 and had a somewhat contentious relationship with the government of the Soviet Union —  is "known to be loyal to the Kremlin."  Suspicious, eh? The study points out that Russia's government supported Maslyakov and the festival by providing funds for the conversion of an old movie theater in Moscow into the festival's own hall. Even worse: the study says Maslyakov has been honored with a "For Merit to the Fatherland" level III Order, which, apparently, must prove that this man is a Kremlin agent.

Maslyakov has in fact been decorated with levels IV, III and II of the Order, and has a total of 10 different state decorations. On top of that, he has been given the illustrious title of "Honored artist of the Russian Federation" and a similar title from the Chechen Republic.

© AFP 2021 / NATALIA DOBRYSZYCKA
Satirical German Political Party Fails to See the Humor in US Troop Deployment to Poland
According to the report, Maslyakov has created a "system," "ready to serve the regime with the best emotion-touching content made for the target audience" and also has access to a "ready-to-act corpus of online communities and fans" on the Internet and social media. The "system" in question amounts to a number of TV shows set up by former participants of the contest, such as Mikhail Galustyan and Alexander Revva, who feature on the Russian "Comedy Club" TV show.

While the naïve may be tempted to assume that humor can be a natural reaction to internal and foreign current events, they should be aware that in Russia, humor is meticulously knit to "legitimize the regime," "delegitimize the foreign leaders" and "frame American values."

They fail to mention that the Western world in general is a great generator of reasons for jokes. The idea, for instance, that British Ajax armored vehicles, designed specifically to increase the mobility and decrease the reaction time of NATO's army, have turned out not to fit into cargo planes without being dismantled first, is not funny at all.

"I won't be surprised if deep in this analysis… Mikhail Galustyan and Alexander Revva are called strategic informational bombers."

Clearly, Stratcom analytics underestimate the scope of the threat, because Russia is not only breeding a new wave of contemporary humor bombers, it also maintains its old Soviet Cold-war era humor legacy. It is of utmost importance to assess the capabilities of such Russian Soviet-made humor terrorists as Yevgeny Petrosyan, 71, Mikhail Zhvanetsky, 83, and, scariest of all, Mikhail Zadornov, 68. The latter is in fact so dangerous he has been denied entry both in Ukraine and the US.

Since the 1980s, the Latvian city of Jurmala has been the host of many Russian humor and music festivals, including "Jurmalina" and "Golosyaschiy KiViN," a musical subsidiary of KVN. In 2015, Latvia suspended most Russian festivals in Jurmala.

"This is simply how Latvia lets out its grudge for the lost festivals in Jurmala," reads one of the comments on the ria.ru website.