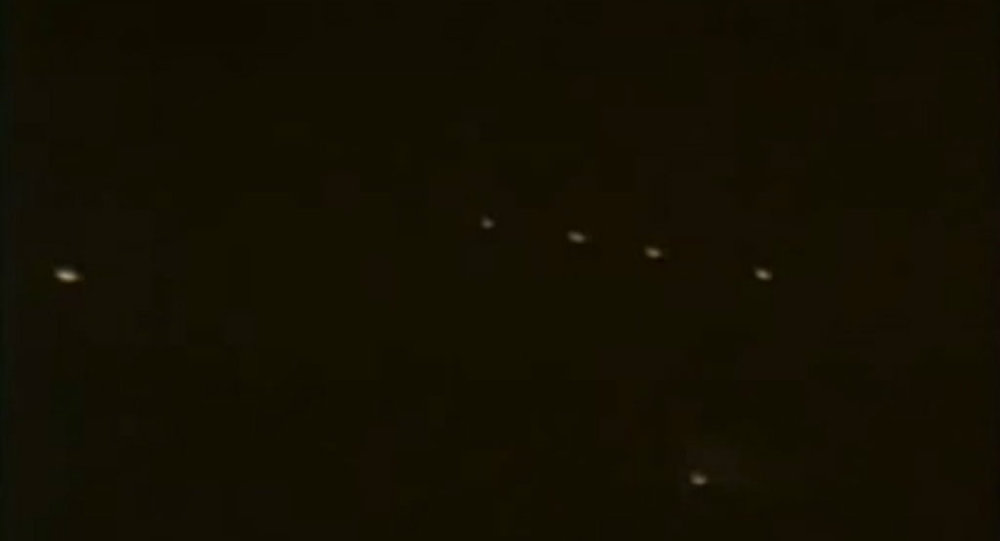 Twenty years ago, on March 13, 1997, thousands of Arizonans looked up at the sky to see bizarre clusters of light dashing across the sky. The so-called ‘Phoenix Lights’ have been the subject of endless speculation. While the US military has taken credit for the phenomenon, conspiracy theories abound on the 20th anniversary of the infamous event.

Observers claimed to see a v-shaped spacecraft the length of several football fields in the night sky, with five bright trailing lights. The lights flew from Tucson to Phoenix, at which point they stopped moving and began to flicker before disappearing entirely.

The bizarre occurrence was documented by thousands of people over a 300-mile stretch. The US Air Force took credit, claiming that the moving lights was actually a squadron of planes flying in formation while the stationary lights were illumination flares. It was done as a part of a training exercise, according to the military.

But some were unsatisfied by this explanation, including former Phoenix city councilwoman Frances Barwood. In a recent interview, she told her local FOX affiliate that the reaction of most Arizonans was to ignore or diminish the lights as irrelevant. "I asked if anybody knew what this object was and could we check into it," said Barwood. "I was met by a whole bunch of stares."

Barwood claims that she was met with ridicule and accusations of being an alien conspiracy theorist. "I got cartoons in the paper with rocket going in one ear and out the other. One with Doctor Spock*… I thought if this many people saw whatever this was first of all, what did they remember? They all described the exactly the same thing," Barwood said. "There was no doubt in my mind. You can't get that many people to agree on the same object."

Fife Symington, Arizona governor from 1991-1997, was among those who ridiculed the idea of the lights being of extraterrestrial origin. During a news conference, he had an assistant dressed as an alien casually walk past him to the laughs of reporters.

But the day that he saw the lights, Symington appeared on local television. "[The object was] enormous. It just felt otherworldly. In your gut, you could just tell it was otherworldly."

A decade later, he confirmed to the press that he believed that the Phoenix Lights were of extraterrestrial origin. "I'm a pilot and I know just about every machine that flies," Symington, a former Air Force captain who flew combat missions in Vietnam, told the Arizona Daily Star in 2007. "It was bigger than anything that I've ever seen. It remains a great mystery. Other people saw it, responsible people. I don't know why people would ridicule it."

As time passes, it seems that the truth behind the Phoenix Lights (unless an Air Force training exercise is truly the whole story) will vanish just as the lights did.

* Miss Barwood may be confusing famous child psychologist Doctor Benjamin Spock with the first officer of the Starship Enterprise, the half-Vulcan Mister Spock, of the Star Trek television and movie franchise.