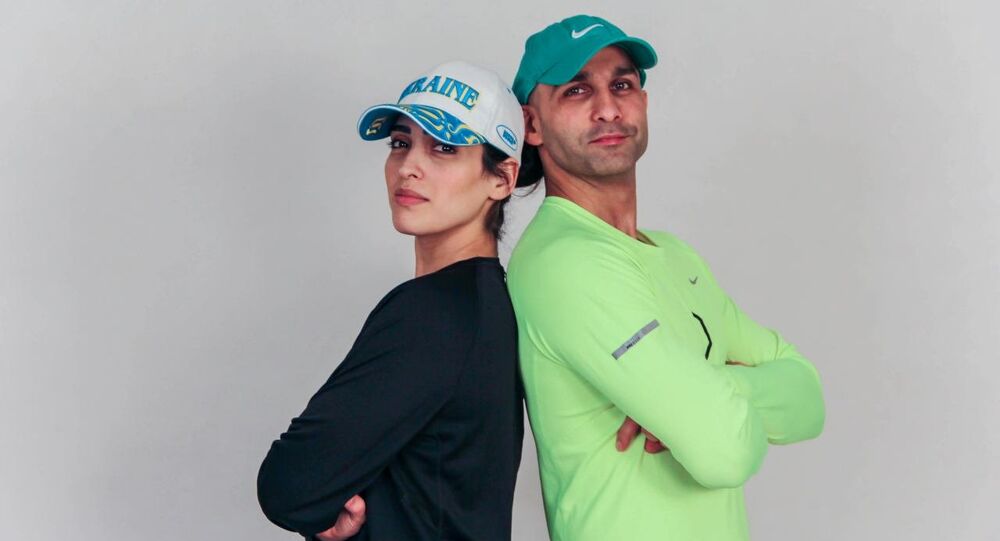 Kickboxing is by no means the most popular sport in Iran among men. That said, a female kick boxer in Iran is definitely no light matter. Shabnam Shahrokhi is breaking stereotypes, as she is the first woman in the country’s history to consecutively hold the title of Vice-Champion of the World in 2015 and 2016.

© Sputnik / Igor Zarembo
Despite BBC Chiller-Diller Iranian Football Fans Eager to Go to 2018 World Cup in Russia
Shahroki isn’t about to back down any time soon as she prepares for the upcoming April championship despite the fact that she has a newborn baby at home. Her journey of becoming a kickboxing pro hasn’t been an easy one. Sputnik Persian met with Shahroki for an interview.

“I have always had an interest in martial arts, but as a child I had no opportunity to practice it until I came to train in a female kickboxing group,” the kick boxer said.

It has been about 9 years since she first started kick-boxing. “After two and a half years of hard training and boxing, I met my husband who then became my coach. Training under his guidance became a new chapter in my sports life, as I was able to reach a whole new level,” Shahroki told Sputnik Persian.

However, after a while she started training with a different coach because her husband became the director of the Asian ISKA organization, which is one of the largest sports organizations in karate and kickboxing.

“I have been to the world championships twice, once in Spain and another time in Portugal. Both times I won a silver medal. While in Portugal, I realized that I was pregnant and for a while professional sports was closed for me. This year's World Cup will be held in Greece and we have decided to participate in it despite the fact that I have a small child,” Shahroki said.

Never too late to start

According to the vice champion, kick boxing requires certain simple skills. It's not as complicated as taekwondo where one needs to start training from an early age.

“I was 26-27 years old when I started kickboxing. It's a little late to start a professional sport, but before that I was engaged in sports only as a hobby. When I started to train hard, it was tough for me because the regular training which normally starts at an earlier age becomes increasingly difficult to manage with age,” Shahroki said.

She further said that the support for her native club “Iskan” is extremely small and for that reason she is often invited to international tournaments by representatives of Spain.

“Since Iskan represents an official Iranian team, in order to comply with the laws of Iran, it is necessary to adhere to certain norms. But, fortunately, for example, wearing a hijab during the performance is not required,” the kick-boxer said.

Shahroki is also engaged in charity work and recently she managed to help raise 10 million rial for the treatment of a child who needed surgery in order to be able to walk again.

After that incident she received many other requests, but unfortunately she cannot answer everybody.

“Such cases should be carefully evaluated so as not to abuse people's trust. In addition, it is quite hard to agree to such cases because it is like carrying a heavy burden,” Shahroki said.

The kick boxer star also denied claims that suggest that she makes money on her Instagram photos.

“I want to say directly that I do not earn on Instagram and I have a negative attitude towards people who do. However, that is only a question regarding attitude towards money and everyone makes that choice themselves,” she said.

She added that people like her, who are popular on social media, are often offered to take part in an event or advertise a product.

“I noticed that the users do not believe when you do not accept such offers. I can say that I did not start a page in order to earn this way. The money that you earn on social networks, comes and goes but the trust that you earn from people – stays,” Shahroki concluded.