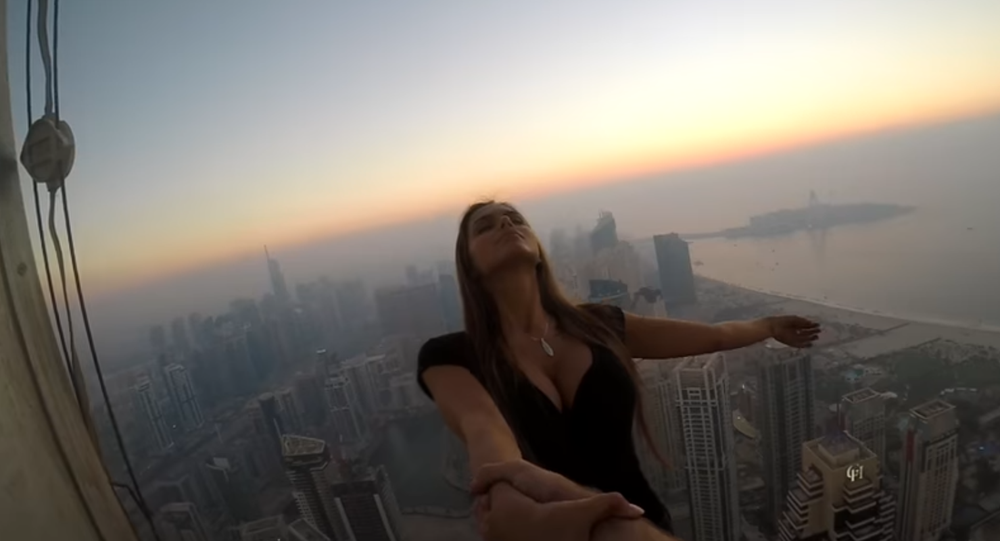 A Russian Instagram bombshell has landed herself in legal hot water after an audacious videoshoot atop a 1,000-foot tall skyscraper in Dubai, UAE. The building’s owner is bringing legal action against her for trespassing.

Viktoria "Viki" Odintcova, a 22-year-old model with over 3 million followers on her Instagram account, posts images that consist primarily of the leggy brunette in various states of undress. While there is no lack of competition in that genre on the photo-sharing site, Odintcova earned mainstream attention when she posted a video of a photoshoot from the roof of Dubai's 73-story Cayan Tower.

With only her assistant's hand for support, Odintcova is shown dangling over the high-rise's ledge. A video, posted on January 26, had over 5 million views on Youtube at the time of this writing. Online comments are divided between appreciating her looks and courage, and condemning her risky stunt as attention-seeking idiocy.

One group that is certainly unamused is Cayan Real Estate Investment and Development, the tower's owner. The company promised to file "immediate legal action" against Odintcova and her production team.

"We are in the process of reviewing our security procedures to understand and rectify where the lapse occurred and how to prevent such in the future," said Gizel Daher, Cayan's director of marketing and communications. "An immediate legal action is running against this condemned incident and the sentence will cover the involved breachers at all levels."

Odintcova had not sought permission for her actions, said Daher, and the company could have been held liable had something gone wrong.

Odintcova suggested in turn that Cayan should be thanking her, instead of suing. "We deserve a reward for disclosing weaknesses in the security of that building," she wrote in Russian. "We were at the rooftop of that building without any evil intentions, however someone else could have come out there to commit suicide or an act of terrorism."

She claimed that no one tried to stop her or her team while they were ascending the tower. "No one asked us any questions, nobody checked our IDs or other documents," she said. "We went up to the roof, spent 40 minutes there. There were no security guards throughout the time we spent on the roof. Then, we went out."

Dubai police stated that they mailed Odintcova an agreement for her to sign, promising to never again repeat such a dangerous act in their city.

Odintcova has returned to her native Moscow, but is eager to journey once again to Dubai, which she calls her "favorite city." "I didn't want to hurt the reputation of the city. I hope we can resolve this misunderstanding," she added. "I can sign the papers if the police send them to me in the mail. Of course I'm not going to repeat something this dangerous again in Dubai."

She also urged others not to repeat her actions. "We do not intend to repeat this action and do not advise anyone to repeat it," she said. "It is a "life-and-death" job, thus these kind of tricks cannot be performed without professionals."

Another young Russian model, Angela Nikolau, has also earned a reputation for skyscraper selfies. Odintcova claimed that she did not perform the stunt to boost her online profile, but rather to overcome her fear of heights.

"Photos and videos were at the second place, the first one was devoted to the examination of bravery and a fight with the self-fears," she said. "…Where is the understanding, that only you — and nobody else — are in charge of your life, of your actions and of their consequences?"