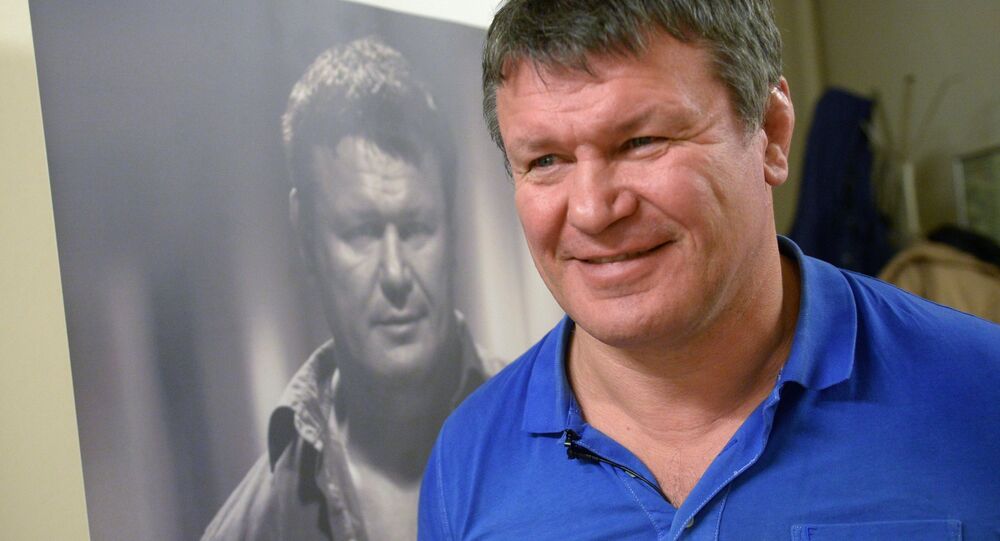 Renowned Russian UFC fighter and actor Oleg Taktarov turned down a "lucrative" Hollywood offer to portray a villain massacring civilians in Ukraine, saying that he would rather "starve" for lack of work.

"Male, Russian, late 40s, Roman is the leader of a group of Russian Separatists, fighting in Ukraine with cunning and brutality. After massacring a peaceful Ukrainian village, Roman and his men go after the downed US planes and the trio of Navy officers who are trying to elude them," Taktarov quoted the offer in his Facebook post.

He added that a single American protagonist would remain alive and defeat all the bad guys.

Oleg Taktarov declined the offer to play the role of a stereotypical Soviet-born villain despite recent difficulty obtaining well-paying work.

"Money is scarce with me like never before, but I have already said ‘No' to this 'lucrative offer' from Hollywood… I'd rather starve."

© REUTERS / Mikhail Palinchak/Ukrainian Presidential Press Service
Why Kiev's Shelling Raids on Donbass Coincide With Poroshenko's Foreign Tours
The post has gained massive coverage on social media, with most users expressing support and respect for Oleg Taktarov. Some of the lines read "Good sport," "I am proud to be of the same origin as you," "Greetings from adequate Ukrainians" and the like.

In a separate comment for REN TV, Taktarov compared the offer to participation in political defamation and said four companies owned by Ukrainian President Petro Poroshenko were making money from the war in Donbass.

"It is obvious who profits from this conflict," he said.

He added he had changed the name of the character proposed to him for ethical reasons.

Taktarov was born in 1967 and moved to the United States in 1994 seeking Hollywood fame. To make his dream come true and earn some money, Taktarov, a Master of Sport in sambo, had to participate in different martial arts tournaments billed as "The Russian Bear." His success in MMA tournaments helped him finally launch his Hollywood career.

In February 2015, MMA legend Jeff "The Snowman" Monson won a bout and announced his paycheck would go to children of the war-torn Donbass region.

© AFP 2020 / GENYA SAVILOV
Freudian Slip? Poroshenko Speaks of 'Temporary Ukrainian Occupation' in Donbass
The Donbass conflict erupted in April 2014 as a local counter-reaction to the Western-sponsored Maidan coup in Kiev, that had toppled the country's elected President, Viktor Yanukovych, in February. Residents of the Donetsk and Lugansk regions held independence referendums and proclaimed the People's Republics of Donetsk and Lugansk. Kiev has been conducting a military operation ever since, and encountered stiff local resistance.

Oleg Taktarov apparently demonstrated that he valued truth and dignity more than the pursuit of money, even when it is difficult to make ends meet.

'No' to Kids in MMA: Renowned Actor, Athlete Oleg Taktarov Against Child Fights