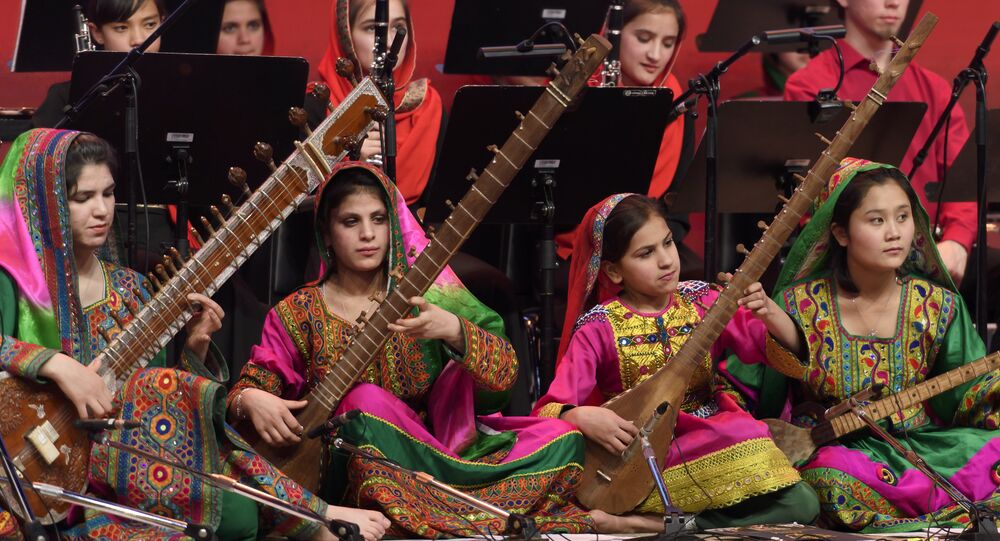 Thanks to the mainstream media, Afghanistan is always associated with enmity, violence and the atrocities of the Taliban. However, the country has rich music traditions, as well as art and culture. Luckily, Europe has the opportunity to discover another side of Afghanistan, with the help of Zohra, an all-female orchestra.

The idea of an all-female ensemble came from female students of the country's National Institute of Music (ANIM) in Kabul. The founder of the orchestra, Naser Sarmast Mohammad, is an Afghan musicologist and a teacher at the institute. She initially thought of maybe a four-or-five member ensemble, but there was so much interest that it quickly evolved into the 30-woman orchestra.

The ladies chose the name Zohra for the first all-female orchestra from Afghanistan after a music goddess in Persian literature.

In mid-January, the ensemble was invited to the World Economic Forum in the Swiss resort Davos to perform for the Annual Meeting Closing Concert.
Since then, the orchestra has had a European tour, winning the hearts of the Europeans and revealing another side of their country.

Sputnik's correspondent in Kabul was able to sit down with the founder and some musicians from the orchestra to talk about the ensemble and its social goals and about that very concert in Davos.

The orchestra is comprised of 30 girls between the ages of 13 and 20 who are studying at the Afghanistan National Institute of Music (ANIM) and are the first women in their families, community and country to learn music in over 30 years.

"The orchestra was founded at the end of 2014 – beginning of 2015 with the aim of bringing hope, impetus and motivation to all the Afghan girls and give them self-confidence," Sarmast told Sputnik.

On the other hand, he explained, they wanted to revive the classical Afghan music tradition and increase the role of female performers.

Commenting on their recent performance in Davos and subsequent tour around Switzerland and Germany, Sarmas said that they are happy that the tour has been able to deliver a positive cultural message. Besides, he said, they are very close to achieving the goals they set at the national level: probably for the first time in the history of Afghanistan, music is playing an important role in uniting their society.

The European tour was the debut of the orchestra on the international arena. It was an artistic challenge and the performance in Davos had a special value. Their audience was sophisticated — it included over 3,000 CEOs, heads of state, politicians, businessmen and experts. Together, they largely define the development of international politics and the global economy.

The ladies were very happy to represent Afghanistan; even though they weren't seasoned professionals, their music served as a message to unite the peoples.

"I think we have been able to make a favorable impression and represent Afghanistan with dignity. The world leaders were fascinated and amazed that our country has so many incentives for creation and the development of culture. The world leaders rose to applaud us for over 10 minutes," he finally said.

Young musician Zarifah Adiba also told Sputnik about her impressions and memories of the tour.

"I still can't believe that we were able to perform before the leading politicians and economists and they rose to welcome us. We were happy to perform an encore. Many of them were surprised to see young performers from Afghanistan. Iranian President Hassan Rouhani later confessed that he did not expect to see so many talented girls from Afghanistan. I think he was sincerely amazed," she told Sputnik.

"Wherever we traveled afterwards, the impressions were largely the same. The audience was at a loss: they have always associated Afghanistan with enmity, violence and the atrocities of the Taliban, thanks to the mainstream media. However now they perceive Afghanistan differently, as a country with rich music traditions, as well as art and culture," she said.

"Afghanistan, striving towards peace and creativity, has been unfairly hidden from the international community by all-absorbing negativity. Zohra tried to disseminate that negativity. I hope we succeeded," she finally stated.