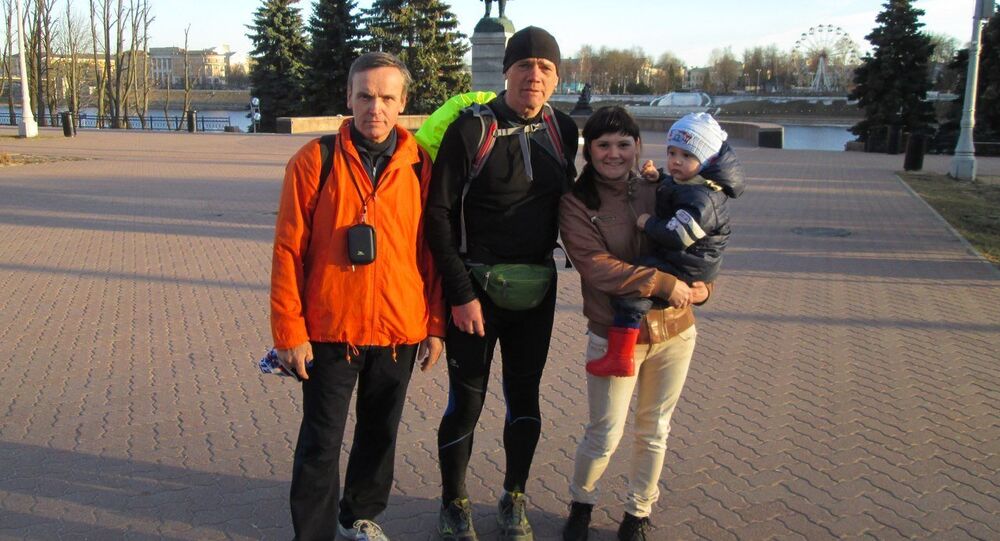 Triumph of Endurance: Elderly Russian Completes Journey Round the World on Foot

An elderly Russian man returns home to St. Petersburg after a two-year long hiking journey around the world.

During his journey the elderly man travelled mostly on foot, carrying only the bare minimum of supplies and spending roughly $8.5 per day on food, with no sponsors to back him up.

"I just like it, that’s all. At my age you don’t have the urge to prove something. I’m just happy," Lukyanov said, according to the TV channel Zvezda.

© Photo : Youtube/Vclips Newstime
Forever Young: Jolly Elderly Men Go Sledding in Wash Bowls
After setting off from his home city of St. Petersburg, Lukyanov trekked across Russia, Kazakhstan, China, Vietnam, Laos, Thailand, Malaysia and Indonesia. After reaching Singapore he took a plane to Chile and continued his journey on foot across South America.

After crossing Uruguay and Argentina, the stalwart adventurer reached Brazil during the Summer Olympic Games in Rio. After taking a flight to Tunisia, he then travelled to Italy by ferry and started the last leg of his journey, marching across Slovakia, the Czech Republic, Austria, Poland and Belarus.

During his triumphant return to St. Petersburg, Lukyanov was greeted by his family members and also by a host of fans that he'd gained during the journey.